Alternate-day fasting is a version of intermittent fasting, which is currently one of the world’s most popular weight loss trends.

Recently, a group of scientists examined the effects of 8-week alternate-day fasting on appetite ratings, appetite hormones and body weight.

Here is a detailed summary of their results.

Alternate-day fasting (ADF) is a weight loss technique that has recently become popular.

One popular version of ADF restricts calories by 75% every second day, while allowing unrestricted eating in between.

Human trials have shown that this method may lead to 4–8% weight loss in just 2–3 months. Here is a summary of study results from over the years:

Additionally, giving in to hunger and cravings is the main reason why people fail to adhere to a diet.

This seems to be less common during ADF, though the reason is not clear.

Changes in hunger and fullness in relation to gut peptides before and after 8 weeks of alternate day fasting.

This trial examined the effects of 8-week ADF on subjective ratings of appetite, appetite hormones and body weight.

It should be noted that results from this study have been published before.

A total of 59 middle-aged, obese adults completed the trial, or 80% of those who initially started. 84% of the participants were women.

The study was divided into 3 periods:

Bottom Line: This trial examined how ADF affects appetite and body weight. The study included 59 people, and was divided into three periods.

For 8 weeks, the participants fasted every second day, with 75% calorie restriction. Conversely, on “feed days” they were allowed to eat whatever they wanted.

To improve compliance, all participants were provided with the food they were allowed to eat on fast days.

This food contained 60% of calories from carbs, 24% from fat and 16% from protein. Participants were allowed to consume unlimited amounts of calorie-free drinks.

Bottom Line: The participants consumed 25% of their calorie needs every other day for 8 weeks.

Subjective ratings of appetite were assessed after a 12-hour fast, before and after a standardized meal.

The standardized meal consisted of a liquid meal, providing 440 calories. It was designed to have a similar macronutrient profile as a typical breakfast, or 60% of calories from carbs, 24% from fat and 16% from protein.

Fasting blood samples were taken before the meal. Blood was also drawn immediately after the meal, and at 30, 90 and 120 minutes afterwards.

The blood was analyzed for total ghrelin, peptide YY (PYY) and several other hormones. Immediately before each of the blood draws, the participants rated their appetite using a visual analog scale (VAS).

Bottom Line: Appetite hormones and subjective ratings of appetite were assessed before and after the 8 weeks of ADF.

The chart below shows the changes in fat mass and lean mass. 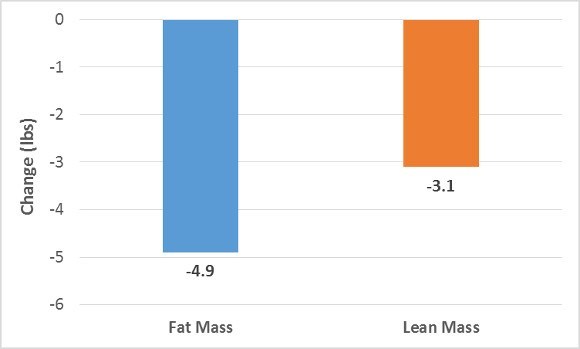 Subjective ratings of fullness after the test meal were significantly higher after 8 weeks of ADF, as shown below. 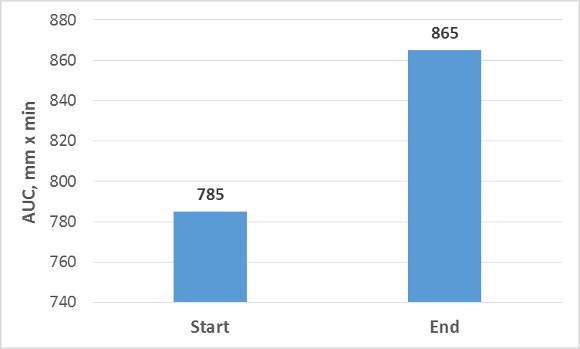 This increase in fullness was associated with higher levels of peptide YY, which is a hormone that reduces appetite after meals.

Similar to fullness, PYY levels after meals increased after 8 weeks of ADF. The reason why ADF increased PYY levels and fullness is unclear.

Bottom Line: Post-meal fullness was greater after 8 weeks of ADF, compared to before.

Eight weeks of ADF did not change hunger ratings.

This is consistent with previous studies suggesting that hunger remains unchanged after 3–12 weeks of ADF.

Conversely, studies on hunger after continuous calorie restriction indicate that compensatory increases in hunger are common.

Taken together, these findings indicate that intermittent calorie restriction is easier to stick to than continuous dieting or fasting.

However, levels of the hunger hormone ghrelin were significantly higher after the test meal at the end of the trial, compared to its levels before the trial.

The reason for these findings is unknown.

Bottom Line: Despite the loss of weight, subjective ratings of hunger didn’t change. This indicates that ADF is easier to adhere to than dieting.

This study had a few limitations.

First, meals were not standardized the day before the appetite measurements took place. Even though the tests were preceded by a 12-hour fast, the previous evening’s meal might have affected the findings.

ADF is an effective weight loss strategy, causing significant weight loss after 8 weeks. Yet despite the weight loss, hunger ratings after a standardized meal remained unchanged.

Additionally, when the ADF was over and the participants went back on their regular diets, subjective ratings of fullness were significantly higher after the standardized meal, compared to a similar meal before the fast.

These findings suggest that ADF is relatively easy to stick to. However, further studies need to examine its long-term effects.