The importance of eating breakfast is frequently highlighted in public health recommendations.

However, the supporting evidence is limited and mainly based on observational studies and short-term clinical trials. 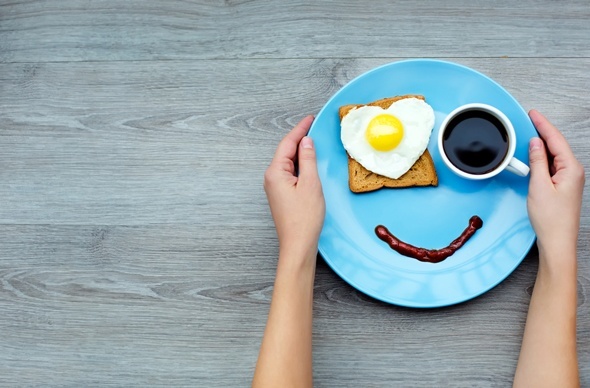 A recent study investigated whether dietary recommendations were more effective at promoting weight loss when coupled with the advice to either eat or skip breakfast.

This 16-week randomized controlled trial took place in multiple locations in Europe and the USA.

A total of 309 overweight or obese men and women between the ages of 20 and 65 were recruited in the study.

At the start of the study, all participants got dietary recommendations from the USDA in the form of a pamphlet.

Participants were then randomly assigned to one of three groups:

The randomization procedure was stratified, meaning that the initial breakfast skippers and eaters were randomized separately. This was done to minimize bias.

To increase compliance, the participants got phone call reminders on weeks 4, 8 and 12.

Compliance was also checked with daily diaries in which the participants indicated whether they were able to follow the breakfast recommendations or not.

Body weight and height were measured at the start of the study. Weight was measured again at the end.

The study did find that the recommendations were effective at changing people’s breakfast habits.

However, there was no significant difference in weight loss between groups.

This chart shows the weight loss among the study groups, divided into two parts depending on the participants’ eating habits before the study. 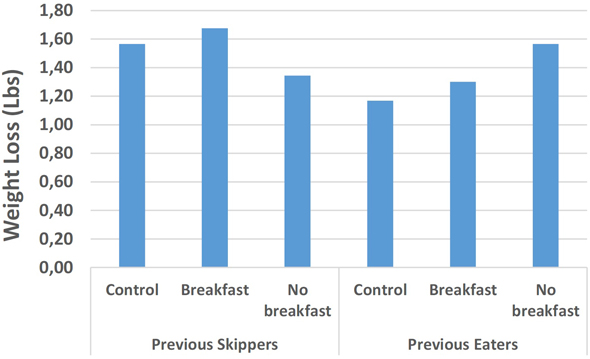 A total of 283 participants finished the study, but 26 dropped out for various reasons.

The main conclusion is that recommendations to skip or eat breakfast do not have any significant effects on weight loss in overweight/obese men and women.

The study does not have any major limitations.

However, it would have been useful if the study had measured body composition or other metabolic variables instead of just body weight.

As pointed out by the researchers, the study indicates that breakfast recommendations do not influence weight loss in a free-living setting.

However, it does not rule out the possibility that breakfast habits can affect weight loss in a controlled setting.

So far, this is the largest randomized controlled trial on the effect of breakfast recommendations on weight loss.

The large number of participants and multiple study sites ensure adequate statistical power and allow the results to be generalized.

However, observational studies can only provide suggestive evidence. There may be other beneficial factors in people’s lifestyles that are also associated with the habit of eating breakfast.

Several short-term clinical studies have investigated the issue. They indicate that breakfast may promote weight loss.

Unlike the current study, these studies aimed at explaining potential mechanisms in a controlled setting. They were also of much shorter duration.

One 12-week study investigated the effect of skipping breakfast in 52 moderately obese women.

Supporting the results of the current study, there were no significant differences between groups. However, there was a non-significant trend towards greater weight loss in those who had breakfast.

Recently, several scientists have pointed out that the evidence regarding the effect of breakfast habits on obesity is severely limited.

In short, this study suggests that advising people to either skip or eat breakfast has no effects on weight loss.

Although it doesn’t rule out that breakfast habits may have metabolic consequences, it strongly suggests that breakfast recommendations do not have a significant impact when people are trying to lose weight.