Osteoarthritis is the most common form of arthritis, characterized by the breakdown of cartilage within joints.

Pain killers or anti-inflammatory medications can help reduce symptoms, but their impact on arthritis is limited.

Type II collagen is found in articular cartilage, which helps the joints move smoothly and prevents the bones from rubbing together when you move.

Previous studies indicate that taking type II collagen supplements may reduce joint pain and stiffness for people who have rheumatoid arthritis or osteoarthritis.

Several previous studies have found that UC-II may significantly relieve symptoms in people with arthritis. Below is an overview of their findings from over the years:

Scientists from Interhealth Nutraceuticals and the University of California examined the effects of UC-II supplements on knee osteoarthritis symptoms.

The purpose of this double-blind, randomized, controlled trial was to examine the effects of undenatured type II collagen (UC-II) on symptoms of knee osteoarthritis.

The study, which lasted for 180 days, was conducted at 13 research centers in southern India. The 191 participants were randomly assigned to one of three groups:

At the beginning and end of the study, the researchers assessed the symptoms of osteoarthritis using the Western Ontario McMaster Universities Osteoarthritis Index (WOMAC).

164 arthritic men and women completed the study, or 86% of those who started.

Bottom Line: This was a randomized, controlled trial examining the effects of undenatured type II collagen (UC-II) on osteoarthritis symptoms.

Osteoarthritis symptoms were calculated from the results of the WOMAC questionnaire, which contains three subscales: pain, stiffness and knee function.

The score ranged from 0–2400, from no symptoms to severe pain and dysfunction.

Supplementing with UC-II improved the overall WOMAC score by 39%, significantly more than the placebo or GC. These results can be seen in the chart below. 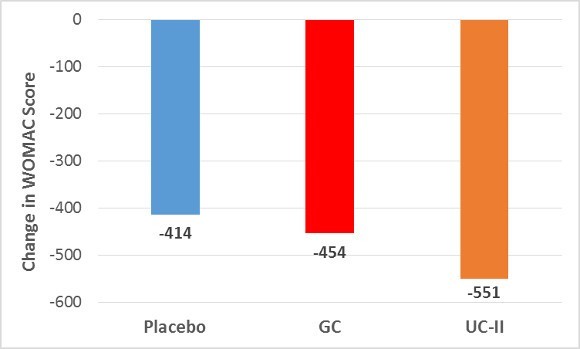 When the subscales of the WOMAC were examined separately, UC-II significantly improved symptoms in all of them.

The LFI score ranged from 0–24, from no symptoms to a severe condition.

For the participants who supplemented with UC-II, the LFI score improved by 37%, compared to the start of the study.

This improvement was significantly greater than in the GC group or the placebo group, which can be seen in the chart below. 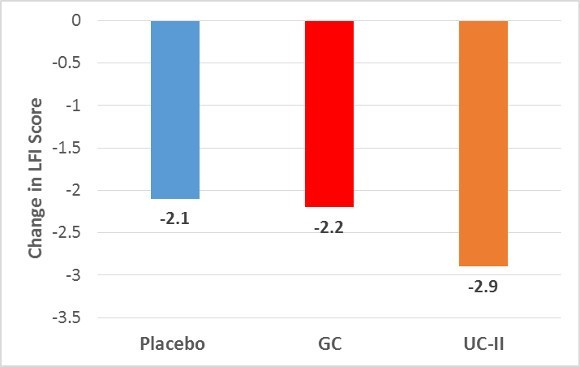 These results were consistent with the results of the WOMAC questionnaire, which showed that supplementing with UC-II improved knee joint function by 39% and stiffness by 41%.

Supplementing with UC-II improved ratings on the VAS scale by 39%. This was greater than both the GC group or the placebo, as shown in the chart below. 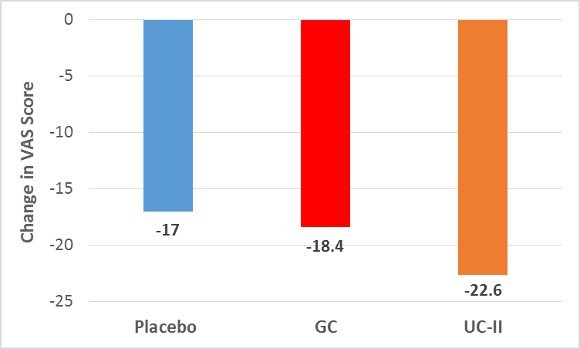 These results were supported by the pain subscale of the WOMAC questionnaire, showing a 41% reduction in knee pain.

However, despite improvements in pain, inflammatory markers did not decrease significantly.

The study had a few potential limitations. First, the results were based on subjective ratings of symptoms, which are prone to bias.

Second, the study was solely funded by InterHealth Nutraceuticals, the company that owns the patent for UC-II.

Additionally, all study materials were supplied by Interhealth Nutraceuticals, and two of the paper’s authors were employees of the company.

However, the study was independently conducted by an Indian company, Laila Pharmaceuticals. Also, an independent statistician performed all analyses and calculations.

Although there is no specific reason to doubt the findings, the results should be confirmed by an independent research group.

Bottom Line: The study’s main limitation was a potential conflict of interest. However, apart from funding the study and writing the paper, independent partners conducted the study itself.

Simply put, if you have osteoarthritis, taking UC-II could make a difference.