Modern wheat has been criticized for being less nutritious than older varieties. In fact, emerging evidence indicates that ancient Khorasan wheat is healthier than modern wheat.

To expand the evidence base, a group of scientists examined the health effects of Khorasan wheat on people with type 2 diabetes.

Their results were recently published in the European Journal of Nutrition. 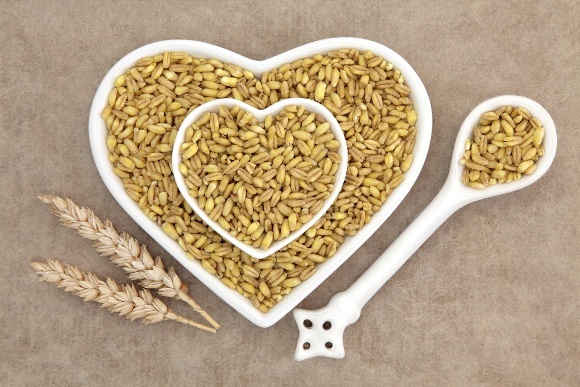 Modern wheat is a key component of many people’s diets.

However, a few previous studies suggest that modern wheat may be less nutritious than older varieties like spelt, emmer, einkorn or Khorasan wheat.

Recently, a few human trials have focused on Khorasan wheat, also called Kamut. Khorasan wheat is an ancient type of wheat with grains that are larger than those of modern wheat.

Three randomized trials, all done by the same research group, have shown that Khorasan wheat may have health effects that are superior to modern wheat.

One 6-week trial in men and women with irritable bowel syndrome (IBS) showed that eating Khorasan wheat instead of modern wheat reduced inflammation and improved symptoms of IBS.

A group of Italian researchers compared the health effects of diets based on modern wheat and Khorasan wheat in people with type 2 diabetes.

This was a randomized, crossover trial examining the health effects of modern wheat and Khorasan wheat in people with type 2 diabetes.

A total of 21 diabetic men and women, with an average age of 64, participated in the study. The participants were assigned to two groups, in random order:

In both groups, the participants’ weekly consumption of wheat products included 500 grams of pasta, 250 grams of crackers and 250 grams of biscuits. Additionally, they ate 150 grams of bread each day.

The wheat products accounted for 50–55% of the participants’ daily calorie intake.
Since the study had a crossover design, all participants were in both groups on different occasions, separated by 8 weeks.

At the start and end of the study, the researchers measured fasting blood sugar, insulin, blood lipids, inflammatory markers and antioxidant status.

Eating Khorasan wheat reduced fasting levels of blood sugar by 9.1% and insulin by 16.3%, whereas modern wheat had no effects.

The difference between groups was significant only for insulin. The chart below shows the changes in blood sugar and insulin in both groups. 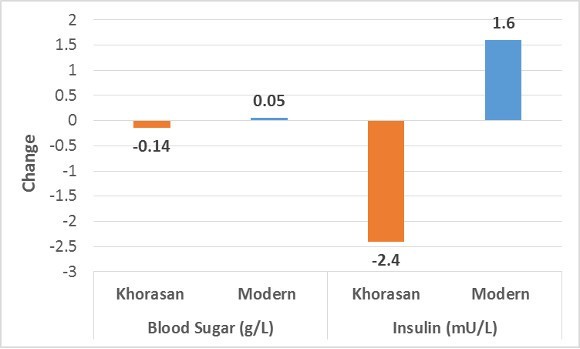 These results are supported by two previous studies in healthy people and patients with heart disease.

In contrast, the diet that contained modern wheat seemed to increase total and LDL cholesterol levels slightly, although the effect was not statistically significant.

However, there were no significant differences between groups. 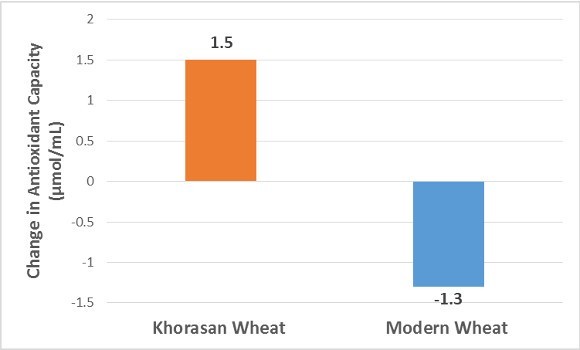 These findings are supported by a previous study examining the health effects of Khorasan wheat in healthy individuals.

This study appears to have been designed and implemented well. Nonetheless, a few potential limitations should be mentioned.

First, the study size was small, which limits its statistical power.

Additionally, the paper doesn’t mention the fiber content of the wheat flours used in the study. Yet fiber is highly relevant, since it can affect various health markers.

Finally, the study was supported by a grant from Kamut Enterprises of Europe, which also provided the Khorasan wheat used in the study. However, the authors declared no conflicts of interest.

Bottom Line: This paper had a few limitations, including lack of information on the fiber content of the diets. Additionally, the study was funded by a company that sells Khorasan wheat.

In short, this study showed that when modern wheat accounts for about half of people’s daily calorie intake, replacing it with Khorasan wheat may have multiple health benefits.

These results are supported by a few previous studies by the same research group, and they were all funded by a Khorasan wheat producer. Although this does not discount the results, they should be confirmed by an independent research group.

If you want to improve your health, replacing your wheat with other fiber-rich grains may help. Khorasan wheat appears to be a good choice.