Studies have shown that the food additive monosodium glutamate (MSG) may reduce appetite.

However, this has only been examined in normal-weight adults, and the results have been inconsistent. For this reason, a group of researchers decided to research MSG consumption in overweight and obese women.

Here is a detailed summary of their findings, recently published in the British Journal of Nutrition. 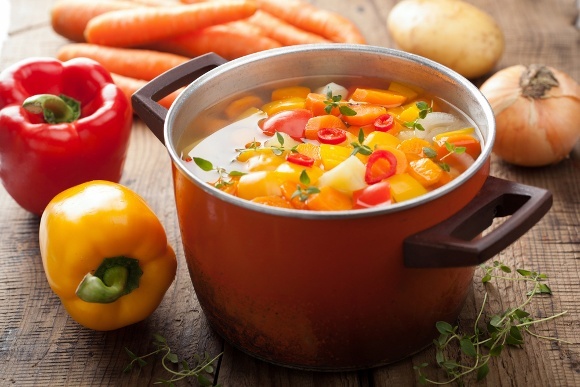 Monosodium glutamate (MSG) is a type of seasoning. It’s well known for its umami taste, which is also known as the fifth taste.

MSG is composed of glutamic acid, a type of amino acid connected to sodium (salt). By making foods more tasty, it may be able to reduce appetite after meals.

This may be because it affects appetite centers in the brain. By binding to umami taste receptors, MSG may signal the brain and promote the release of satiety (appetite-reducing) hormones.

Several studies have examined the effects of MSG on appetite and calorie intake. In a few long-term studies in institutionalized elderly people, MSG had no effects on calorie intake or body weight.

Similarly, another study showed that adding MSG to soup had no significant effects on subsequent appetite or calorie intake.

One study even found that adding MSG to a high-protein meal increased calorie intake at the next meal, without affecting appetite.

Conversely, three other studies suggest that adding MSG to chicken broth or soup may reduce feelings of hunger and the desire to eat, resulting in a lower calorie intake after the meal.

A group of researchers set out to examine the effects of MSG on appetite and calorie intake in overweight and obese women.

This was a randomized crossover trial. It included a total of 68 overweight or obese, but otherwise healthy, women. None of them had an eating disorder.

They were randomly assigned to one of two groups:

The study had a crossover design, which means that all participants were in the MSG group and the control group on different days.

During the lunch and the afternoon snacks, the participants were allowed to eat as much as they wanted, until comfortably full.

Their food selection and calorie intake were measured. Also, throughout the test day, the participants’ appetites were assessed using a questionnaire.

Bottom Line: This was a randomized crossover trial that examined the effects of MSG on subsequent appetite and calorie intake.

The MSG soup led to lower calorie intake at the lunch buffet. Calorie intake was also lower during the afternoon snacks, but the difference was not statistically significant.

The chart below shows the differences in calorie intake between groups. 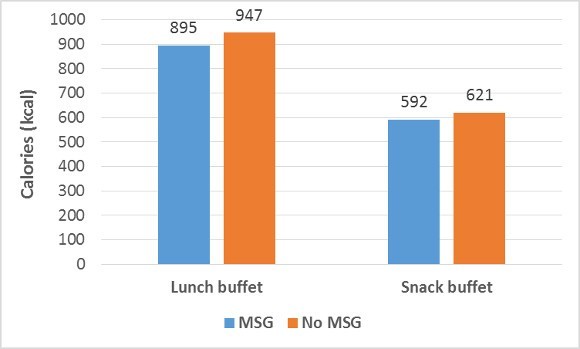 These findings are supported by previous studies.

Bottom Line: Eating a soup seasoned with MSG led to a slightly lower calorie intake at a subsequent lunch buffet, compared to the soup without MSG.

The MSG soup reduced the subsequent calorie intake from high-fat, savory foods — such as cheese, chicken nuggets and hummus — at the lunch and afternoon snack buffets. This might explain the reduced calorie intake at lunch.

Supporting this, one previous study found that a savory meal, containing MSG, reduced the consumption of high-fat, savory foods at a subsequent buffet, compared to a sweet or bland meal that did not contain MSG.

The MSG-seasoned soup caused higher subjective ratings of hunger and lower ratings of fullness, compared to the soup without MSG.

This is intriguing, since higher hunger ratings would be expected to increase calorie intake. However, in previous studies, calorie intake and appetite ratings have not always been consistent.

The cause of this is unclear. It is possible that subjective ratings of appetite, using a visual analogue scale, are simply not accurate enough.

Bottom Line: The MSG-seasoned soup led to increased hunger and reduced fullness, compared to the soup without MSG.

The study was well designed and implemented. However, it had a few minor limitations.

Eating a soup seasoned with MSG 10 minutes before lunch or other meals may not reflect everyday eating habits.

Additionally, this study examined the short-term effects of MSG. Eating MSG for longer periods, such as many days or weeks, might provide different results.

Finally, this study included only overweight or obese women. The results may not necessarily apply to men or healthy-weight individuals.

Bottom Line: The study was well planned and executed. It had a few minor issues, in regard to generalizing the results.

In short, this study found that eating a soup seasoned with MSG reduced subsequent calorie intake at a lunch buffet.

This is even though MSG increased the feeling of hunger. MSG also affected food choice, decreasing the consumption of high-fat, savory foods.

A few previous studies support these findings, but the evidence is inconsistent overall.

More studies are needed before adding MSG can be recommended for the purpose of weight loss.