Industrially produced trans fats are known to be bad for heart health. Yet the effects of natural trans fats, found in dairy products and meat, are less clear.

For this reason, a team of scientists compared the effects of these two groups of trans fats on the blood lipid profile.

Below is a detailed overview of their results, recently published in the American Journal of Clinical Nutrition. 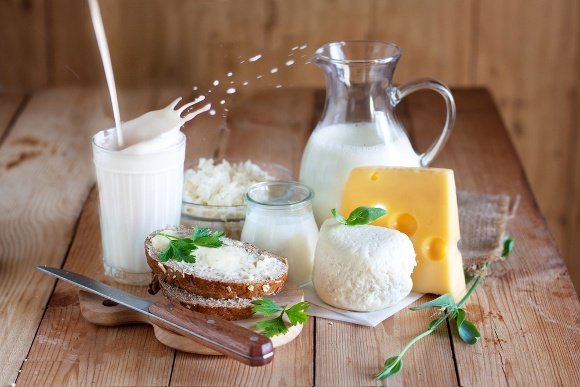 Isolated Trans Fats are Unhealthy, Regardless of the Source

These include foods such as margarine, shortening, deep-fried food, microwave popcorn, and store-bought cookies and cakes.

However, trans fats are also naturally present in smaller amounts in body or milk fat from ruminant animals like cows, sheep and goats.

Many studies suggest that a high intake of industrially produced trans fats may increase the risk of heart disease, and limiting intake is recommended.

Nonetheless, observational studies in humans have provided inconsistent results about the health effects of natural trans fats in general.

Human trials are few and have not been able to provide strong evidence, due to shortfalls in their design.

A group of researchers examined the difference between industrially produced and natural trans fats on the blood lipid profile.

This was a double-blind, randomized, controlled trial comparing the effects of synthetic and natural trans fatty acids on blood lipids.

Healthy men and women, aged 25 to 65 years, participated in the study. Most of them were middle-aged, overweight or obese, and at a potential risk for heart disease.

The participants were assigned to four diets in a random order:

Each diet lasted for 24 days and was completely controlled. All the diets had the same macronutrient composition: 34% of calories from fat, 50% from carbs and 17% from protein.

The study had a crossover design, meaning that each participant was in each of the groups on different occasions. At the start and end of each of the diets, the researchers measured blood lipids, inflammatory markers and body weight.

A total of 116 participants started the study, and 91% completed at least one of the four study periods.

High levels of cholesterol in the blood may increase the risk of heart disease. 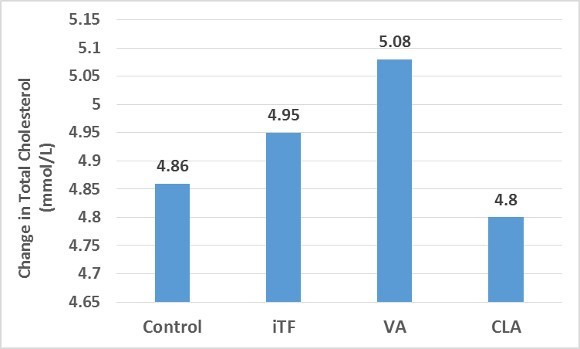 Therefore, it can be concluded that trans fats increase cholesterol, regardless of their source. One exception is conjugated linoleic acid (CLA), which did not affect total cholesterol.

When levels of cholesterol become too high, it is often because of increased concentration of low-density lipoproteins (LDL).

Cholesterol carried around in LDL (LDL-cholesterol) is considered especially unhealthy when its levels are abnormally high.

In the present study, LDL-cholesterol increased during both the iTF and the VA diets, compared to the control. The rise in LDL-cholesterol, however, was significantly higher during the VA diet, as shown in the chart below. 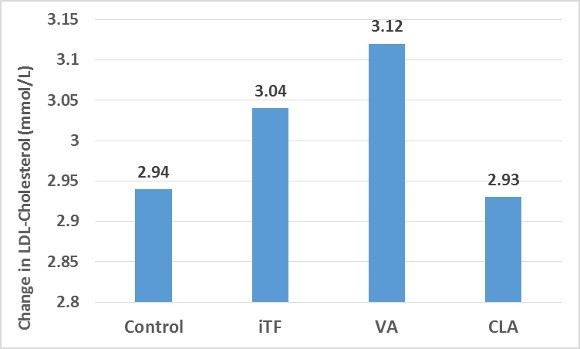 These results are supported by a previous study showing that a diet high in vaccenic acid increased LDL-cholesterol.

Apolipoprotein B (apoB) is a class of proteins found on the surface of low-density lipoproteins (LDL). High levels are associated with an increased risk of heart disease.

In the current study, both the VA and the iTF diets increased levels of apoB, compared to the control. However, apoB increased more during the VA diet, as shown in the chart below. 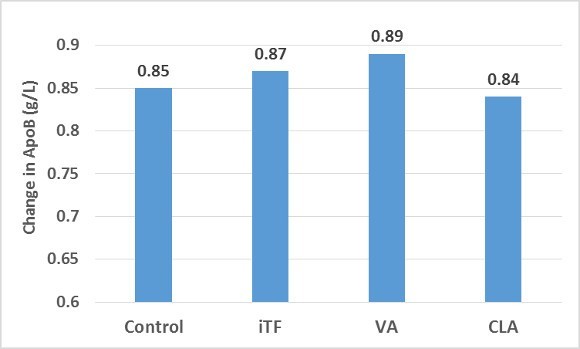 Bottom Line: Both types of trans fats raised levels of LDL-cholesterol and apoB, but VA caused larger increases to both.

Although this is supported by many observational studies, the benefits of raising HDL-cholesterol have not been confirmed in clinical trials.

In the present study, HDL-cholesterol increased during the VA diet. In comparison, the iTF diet had no effects. 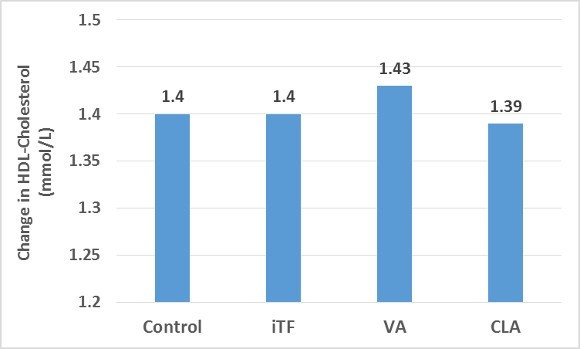 Apolipoprotein A1 (apoA1) is a class of proteins mainly found on the surface of high-density lipoproteins (HDL).

As with HDLs, high levels of apoA1 have been associated with a reduced risk of heart disease. In the present study, apoA1 increased during the VA diet, but not the iTF diet. 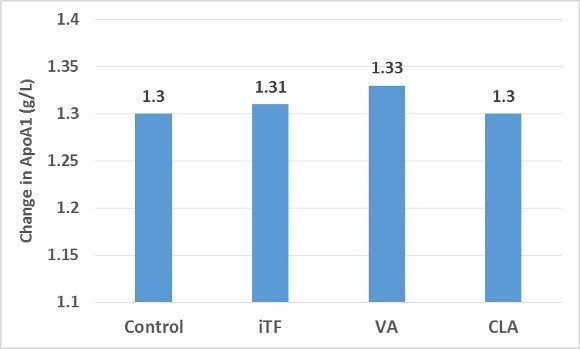 Triglycerides are a type of fat that circulate in the blood.

As with cholesterol, abnormally high levels of triglycerides have been associated with an increased risk of heart disease.

In the current study, the levels of triglycerides rose higher during the VA diet, compared to the iTF diet. 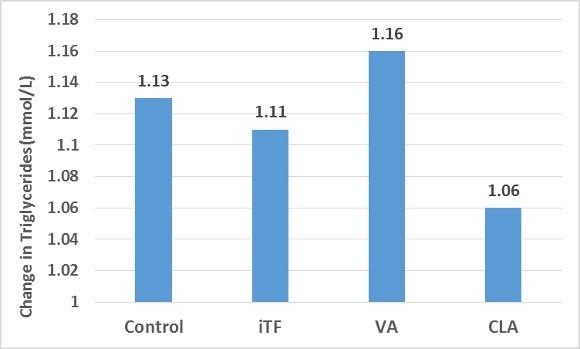 In contrast, CLA lowered triglyceride levels, compared to the control.

Fibrinogen is a type of protein that helps the blood clot. As a result, high levels of fibrinogen are associated with an increased risk of heart disease.

In the present study, the VA diet lowered fibrinogen, compared to iTF and the control diet.

High levels of fibrinogen have been associated with systemic inflammation. In this study, however, levels of inflammatory markers remained unchanged across diets.

Bottom Line: Levels of fibrinogen decreased when the participants were on a diet high in vaccenic acid. Industrially produced trans fats had no effects.

This study did not appear to have any serious limitations, but a few issues should be mentioned.

First, the VA and iTF diets were supposed to provide the same amount of calories from trans fat. However, these two diets actually differed by 0.67%.

Second, the study tested much higher amounts of trans fat than are normally consumed in the USA.

Finally, the dietary context may play a role. In this study, the researchers used synthetic vaccenic acid that was not consumed with dairy fat or meat.

Previous studies suggest that vaccenic acid does not affect the risk of heart disease when eaten in normal amounts with milk or meat.

Bottom Line: The study did not have any important limitations.
However, the VA diet provided a greater proportion of calories from trans fat, compared to the iTF diet.

In short, this study shows that both industrially produced trans fats and vaccenic acid, the most common natural trans fat, adversely affect the blood lipid profile, when consumed in equal amounts.

However, this does not mean that natural foods containing natural trans fats need to be avoided. Studies indicate that when eaten in normal amounts with milk or meat, vaccenic acid does not impair heart health.

For optimal health, it is more important to limit the intake of industrially produced trans fats from processed food.