These beverages contain stimulants, such as caffeine, which are supposed to provide a physical and mental boost.

However, drinking too many energy drinks may have serious effects on heart function and other aspects of health. 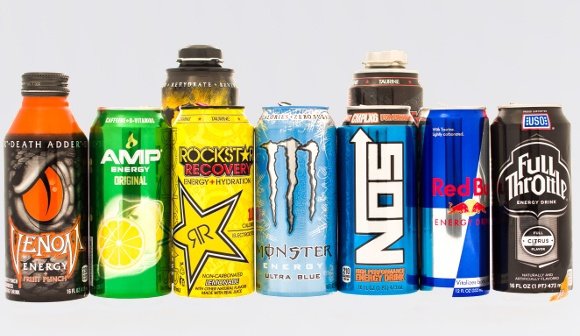 A Randomized Trial of Cardiovascular Responses to Energy Drink Consumption in Healthy Adults.

This was a randomized, controlled crossover study that examined how energy drinks affect heart function. It included 25 healthy men and women, aged 26 to 31 years.

There were two study groups:

On both occasions, the participants were fasting. They also hadn’t had any energy drinks, coffee or alcohol for at least 24 hours prior to each study day. Additionally, all study drinks were finished within 5 minutes.

Since this was a crossover trial, the participants got both drinks in random order on separate days, with less than 2 weeks apart.

Before and after drinking the energy drink and the placebo, the researchers measured circulating levels of caffeine, blood sugar, norepinephrine, blood pressure and heart rate.

Blood pressure and heart rate were also measured while the participants were under 2 minutes of stress. Responses to three types of stress were measured: physical stress, mental stress and cold stress.

Blood pressure increased after the energy drink, whereas the placebo drink did not cause any statistically significant changes in blood pressure.

The chart below shows the changes in mean blood pressure in both groups: 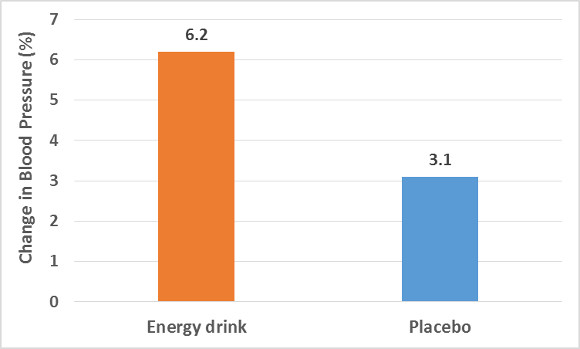 Although the study did not examine how long the effects on blood pressure lasted, they were probably only temporary.

Blood pressure also rose during physical, mental and cold stress, but the energy drink didn’t add to this increase.

Additionally, the energy drink did not affect heart rate, which remained normal after both drinks.

Bottom Line: Blood pressure increased significantly after the energy drink. Conversely, the placebo drink did not lead to any significant changes.

Also called noradrenaline, norepinephrine is a stress hormone that helps prepare the body for action.

For this reason, its levels are lowest during sleep, and highest during periods of stress and/or fear. It is one of the body’s “fight or flight” hormones.

High levels of norepinephrine have been linked with an increased risk of heart disease in predisposed individuals.

In the present study, levels of norepinephrine increased after both drinks.

However, the rise was significantly higher after the energy drink, compared to the placebo.

The chart below shows the differences between groups:

As with the rise in blood pressure, the rise in norepinephrine was probably just temporary. Therefore, its health relevance is unclear.

Both the energy drink and the placebo drink contained equal amounts of sugar. For this reason, the blood sugar levels rose similarly after both drinks, as expected.

Several previous studies have shown that caffeine may blunt the insulin response to sugar intake for those who are not regular caffeine consumers.

However, this does not seem to be the case here.

Many of the participants might have been regular coffee drinkers, or the statistical power of the study was simply not great enough to detect the between-groups difference as significant.

Bottom Line: The energy drink and the placebo contained the same amount of sugar, and blood sugar levels increased similarly after both drinks.

The main limitation of this study is the small number of participants. The study may not have had enough statistical power to detect smaller between-group differences.

Another limitation is that the energy drink contained several stimulants: caffeine, taurine, guarana, milk thistle and ginseng root. This makes it impossible to isolate the effects of the individual ingredients.

This study also only examined one energy drink, which contained a mixture of commonly used stimulants like caffeine. Other brands and products may have different ingredients.

Otherwise, this study appears to have been designed and executed well.

This small study shows that energy drinks may cause a sudden rise in blood pressure and norepinephrine.

The authors concluded that over time, these factors may possibly increase the risk of heart disease.

However, the extent of this risk is unclear, and needs to be studied further before any solid conclusions can be reached.

At the end of the day, energy drinks should be used sparingly, if at all. In addition to possibly harmful stimulants, they also contain sugar and other unhealthy ingredients.

Plain coffee is a much healthier alternative.