However, it is not known whether all types of sugar are equally fattening.

For this reason, a team of scientists recently examined how different forms of sugar affect calorie intake.

Here is a detailed summary of their results, published in the American Journal of Clinical Nutrition. 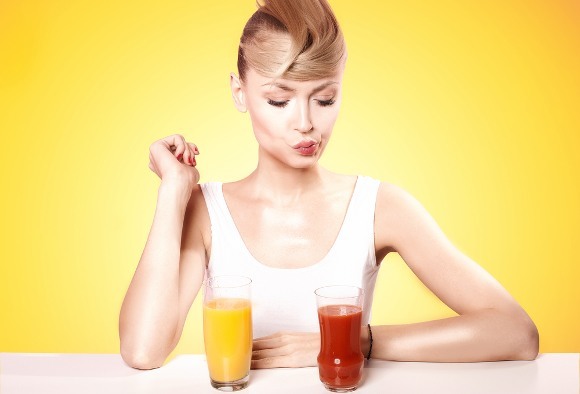 Sugar-sweetened beverages are a major source of calories in Western society.

Several factors could explain this:

However, exactly how or why this happens is not fully understood, and further studies are needed.

Scientists from Seattle examined the effects of fructose-sweetened beverages on calorie intake, and compared it with beverages sweetened with glucose, high-fructose corn syrup or aspartame.

This study was based on the secondary analysis of two randomized, controlled crossover trials.

A total of 9 healthy, normal-weight adults participated in this trial. They were randomly assigned to one of three groups:

The amount of glucose and fructose consumed daily was equivalent to 25% of each subject’s estimated calorie requirement. Conversely, the aspartame-sweetened drink provided only 4% of their estimated calorie needs.

The study had a crossover design, which means that all participants were in each of the three groups on different weeks, separated by 20 days.

All participants spent 8 days in each group, during which the study kitchen provided them with standardized food, or an amount equivalent to 125% of their estimated calorie requirements.

A total of 24 healthy adults completed this trial. Half of them were overweight or obese, whereas the rest were normal-weight.

They were randomly assigned to one of three groups:

Otherwise, trial B was identical to trial A.

Bottom Line: This study used data from two small randomized controlled trials examining the effects of fructose on calorie intake, and comparing it with glucose, high-fructose corn syrup or aspartame.

In trial A, calorie intake was significantly higher among those who got 25% of their estimated calorie needs from sugar-sweetened beverages, compared to those who got aspartame.

The chart below shows the differences in calorie intake between groups, presented as the percent of estimated calorie requirement: 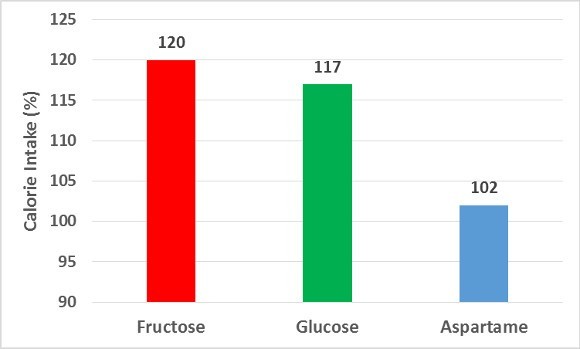 In the present study, body weight did not change significantly between groups. This is probably explained by the low statistical power of the study, and its short duration.

Fructose, glucose and high-fructose corn syrup all had similar effects on calorie intake. Also, no differences were detected when the participants were divided into subgroups based on gender or body weight.

The chart below shows the differences in calorie intake between groups in trial B, presented as the percent of estimated calorie requirement. 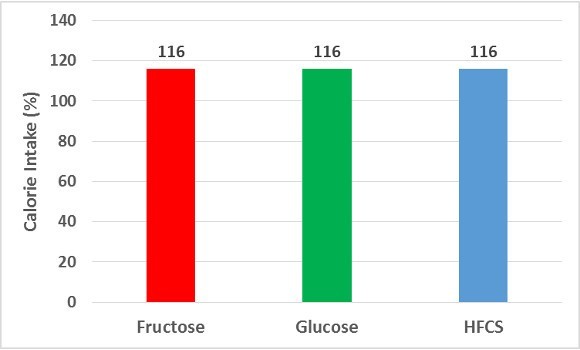 These findings are in line with previous studies.

The study was well planned and executed. However, it had several limitations.

First, both trials recruited a small number of participants, especially trial A, which included only 9 participants. This limited the statistical power, and means that smaller but significant findings may have been missed.

However, trial B included a greater number of participants than trial A, and was based on proper sample-size calculations.

Second, both trials were intentionally of short duration to prevent adverse health effects, such as weight gain. But this means that the results may not necessarily be generalized to longer periods.

Additionally, in trial A, the participants in the fructose and glucose groups were provided with more calories, or a total of 150% of their calorie requirements, compared to those in the aspartame group, which received only 129%.

This difference might have contributed to the differences in calorie intake between groups.

Finally, the participants were provided with a standardized diet that did not include snack foods high in sugar and fat. This limits the generalizability of the results further.

Bottom Line: The study was well planned and implemented. However, it had a few shortfalls that might have affected the results and limited the generalizability of the results.

Fructose, glucose and high-fructose corn syrup all had a similar effect. This indicates that liquid sugar increases calorie intake, regardless of the type of sugar.

Simply put, if you care about your weight, you should avoid sugar-sweetened beverages.