Eating too fast has often been linked to weight gain, yet the available evidence is inconclusive.

For this reason, a team of Japanese researchers conducted a meta-analysis that combined the results of several previous studies.

Here is a detailed summary of their findings, recently published in the International Journal of Obesity. 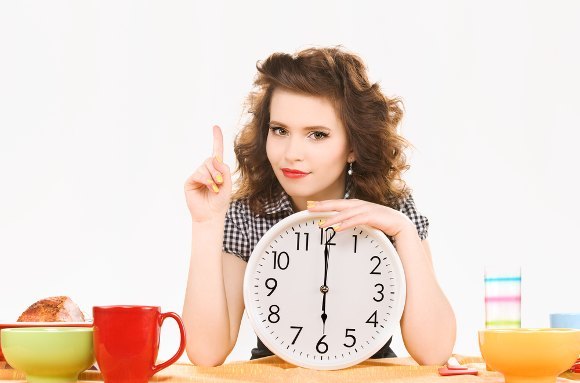 How eating behavior affects weight gain and obesity is an area of active research. One interesting part of this is eating rate, or the speed of eating.

Because eating speed is so important, slow and thoughtful eating is often recommended as an effective weight loss strategy.

This is supported by several observational studies, suggesting that eating slowly may reduce the risk of obesity.

However, the available evidence is not entirely conclusive.

A team of Japanese scientists conducted a systematic review and meta-analysis of observational studies about the association of eating speed with obesity.

Association between eating rate and obesity: a systematic review and meta-analysis.

This meta-analysis included data from 23 observational studies that investigated the link between eating speed and obesity.

Using the combined dataset, the researchers tried to answer the following two questions:

In this study, “eating speed” refers to how quickly people finished a meal.

Bottom Line: This was a meta-analysis, combining the results of 23 observational studies. It examined the association between eating speed and weight gain or obesity.

Finding 1: Fast Eaters Are Much More Likely to Be Obese

The study showed that fast eaters tend to have a higher average BMI. They are also more likely to be obese, compared to those that eat slower.

The results can be seen in the plot below, which shows the obesity risk in relation to eating speed. 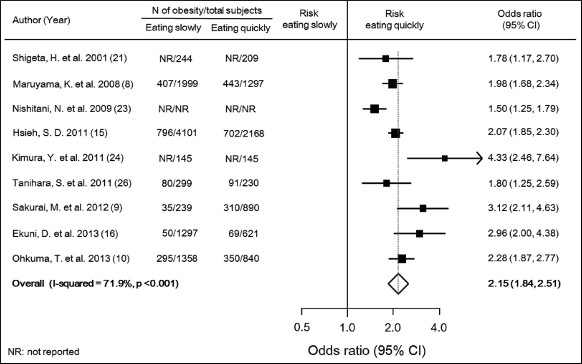 As you can see in the plot above, obesity is very strongly linked to eating quickly.

This association was weaker in diabetics, but was otherwise consistent across subgroups.

Bottom Line: This study shows that people who eat more quickly tend to have higher BMIs and obesity rates, compared to people with less fat mass.

The analysis included three studies examining the association of eating rate and weight gain or the risk of developing obesity.

One study in firefighters showed that those who ate quickly at the station gained 9.9 lbs (4.5 kg) over a 7-year period, compared to only 6.8 lbs (3.0 kg) among those who ate slowly.

The second observational study found that those who ate quickly gained 2.4 lbs (1.1 kg) more weight over an 8 year period, compared to those who ate more slowly.

Finally, the third study showed that university students who finished their meals quickly were at an increased risk of becoming obese.

How Does Rate of Eating Affect Weight?

Other studies have proposed several possible explanations for the link between eating rate and obesity.

However, the present study does not support the above-mentioned theories. In this analysis, calorie intake turned out to be similar across different eating rates.

Instead, the authors suggested an alternative explanation.

Fast eaters may chew their food less than slow eaters. A lack of chewing may inactivate histamine, which is a type of neurotransmitter. This, in turn, may reduce fat burning.

Bottom Line: Several factors may explain how the speed at which you eat affects weight gain. The authors suggested that faster eating is linked to a reduction in fat burning.

The study seems to have been well executed, but a few important limitations should be mentioned.

First off, this meta-analysis included only observational studies, which cannot prove a causal relationship. Randomized controlled trials are needed to establish causality.

Second, in all of the included studies, save one, eating speed was assessed from self-reports. This may have caused some inaccuracies.

Third, many of the included studies categorized eating rates differently.

Finally, most of the participants were Japanese. This limits the generalization of the results to other populations, who may have different dietary habits.

Bottom Line: The study included results from observational studies, which can’t demonstrate causality. Additionally, the participants were mostly Japanese and the results may not be generalized to all populations.

This meta-analysis clearly suggests that the speed of eating affects weight.

Faster eaters have higher BMIs and are much more likely to be obese. People who eat quickly also gain much more weight when followed for several years.

One study suggests that retraining eating behavior, by reducing portions and slowing down the speed of eating, can lead to significant weight loss.

However, randomized controlled trials are needed to confirm these findings, which for now are only observational in nature.