Eating food causes a temporary increase in metabolic rate, or calories burned. This is known as diet-induced thermogenesis, or the thermic effect of food (TEF).

Some studies indicate that TEF may be higher in the morning. Therefore, a team of researchers set out to examine how meal timing affects TEF.

Here is a detailed summary of their findings, recently published in the International Journal of Obesity. 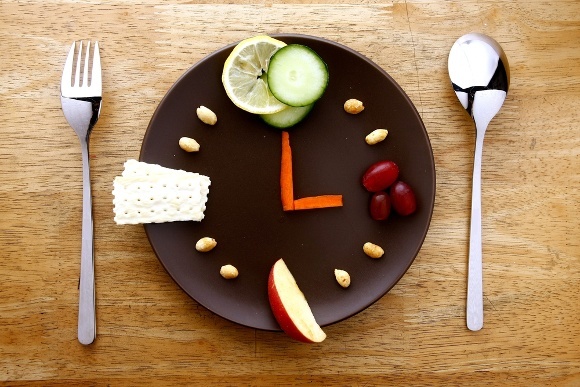 The body’s metabolic activities fluctuate throughout the day. For example, the metabolic responses to a meal are different in the morning than later in the day.

Most notably, insulin sensitivity is higher in the morning, causing faster blood sugar clearance after a meal. It decreases as the day goes on, reaching its lowest point during the night.

Previous studies have also found that the rise in metabolic rate after a meal, or TEF, is higher in the morning than in the evening.

Although TEF is only responsible for about 10% of the body’s total calorie expenditure, it is believed to play a role in the development of obesity.

In fact, several observational studies suggest that consuming a large part of your daily calories in the evening is associated with an increased risk of obesity.

However, the available evidence is not entirely conclusive. Studies suggest that skipping breakfast, and eating more in the evening and afternoon, has no effect on calories burned over a 24-hour period.

What’s more, one large randomized controlled trial, which we reviewed last September, showed that skipping breakfast for 4 months has no effects on body weight in overweight and obese adults.

A group of researchers from Turin, Italy compared the effects of breakfast and dinner on blood sugar control and the post-meal increase in the body’s metabolic rate.

Is the timing of caloric intake associated with variation in diet-induced thermogenesis and in the metabolic pattern? A randomized cross-over study.

The main purpose of this randomized crossover trial was to compare the effects of breakfast and dinner on post-meal metabolic rate. It also examined the effects on blood sugar control and free fatty acids.

A total of 20 normal-weight men and women participated in the study. They were randomly divided into one of two groups:

A high protein content is known to promote calorie expenditure, or a greater thermic effect of food.

The trial had a crossover design, which means that the participants who got breakfast on the first day got dinner a week later, and vice versa.

The researchers measured resting metabolic rate, blood sugar, insulin and free fatty acids before each meal and again after the meal was finished.

Bottom Line: This was a randomized crossover trial that compared the effects of a standardized high-protein breakfast and dinner on metabolic rate (calories burned), blood sugar control and free fatty acids.

The amount of calories burned was significantly greater after the morning meal, compared to the later meal, as seen in the chart below. 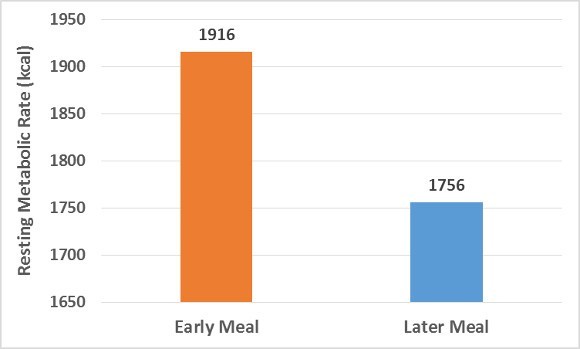 These findings are supported by a few previous studies.

Several factors may explain these differences. First, levels of the hormone epinephrine are higher in the morning than later in the day. Epinephrine may increase metabolic rate.

Second, insulin resistance may decrease metabolic rate, possibly explaining why it is lower in the evening.

Bottom Line: An early meal caused a greater increase in metabolic rate and calorie expenditure than an identical meal eaten in the evening.

In the study, the levels of circulating free fatty acids (FFAs) increased less after the early meal, compared to the later meal. 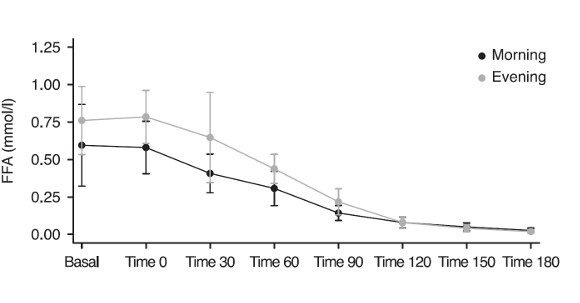 Previous studies support these results. Circulating FFAs have been reported to be higher around noon or in the afternoon, compared to early morning.

Although elevated levels of FFAs are perfectly normal after a meal that contains fat, increased base levels of FFAs have been associated with obesity, type 2 diabetes and metabolic syndrome. 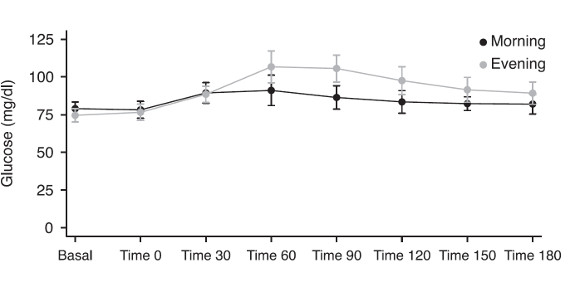 This aligns with previous studies.

A few factors may be responsible for these effects:

Bottom Line: Later meals caused a greater increase in glucose and insulin levels, compared to earlier meals. This indicates that blood sugar control is not as efficient in the evening.

This study appears to have been well designed and implemented. However, its results may not apply to all situations.

The test meal contained a relatively high amount of protein, or 30% of total calories. If the meal had contained a less protein, the differences resulting from timing may have been less pronounced.

Additionally, all of the subjects were of normal weight. These results need to be confirmed in overweight or obese people.

Bottom Line: The study was well planned and executed. However, the test meal had a high protein content and all participants were of normal weight, which may limit the generalizability of the results.

In short, this study suggests that meal timing is important for weight loss and maintenance.

Taken together, the available evidence indicates that eating a greater proportion of calories earlier in the day, and avoiding big meals at night, may be useful for losing weight.