Not all dairy fat is equal. Sometimes the fat is enclosed in a layer called the milk fat globule membrane (MFGM), composed of phospholipids and protein.

The presence of MFGM may be the reason that the various dairy products have different effects on health.

Cream contains twice as much MFGM as butter, so researchers set out to study the health effects of these two dairy products. 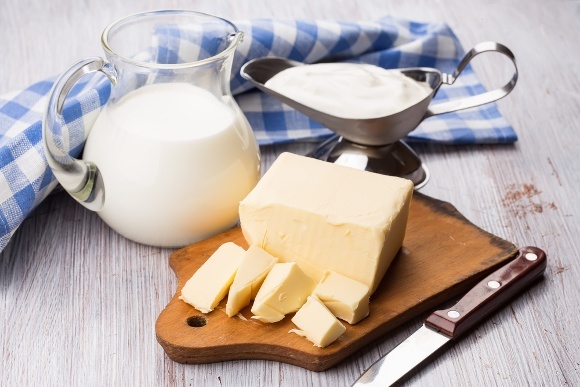 Observational studies indicate that the relationship between dairy fat and heart disease depends on the type of dairy product consumed.

Supporting this, randomized controlled trials have found that butter raises cholesterol levels more than cheese, even though the fat content is equal.

Most dairy fat is enclosed in a layer called the milk fat globule membrane (MFGM), which may be the cause of these differences. This membrane is primarily composed of phospholipids, but around 20% is protein.

Butter is an exception. When butter is produced, the churning process removes most of the MFGMs from the fat. In comparison, cream contains twice as much MFGM.

Bottom Line: Studies have indicated that different dairy products have varying effects on health markers, such as cholesterol levels. This may be due to the presence and quantity of MFGMs, which enclose the dairy fat.

Many years ago, scientists hypothesized that the presence of MFGMs may contribute to how dairy products affect several aspects of health.

Researchers at the Uppsala University Hospital in Sweden set out to test this hypothesis in a randomized controlled trial.

The results were recently published in the American Journal of Clinical Nutrition:

Here, we discuss the main results of this study and their relevance to human health.

This was an 8-week, single-blind, randomized trial in healthy, overweight men and women. A total of 57 participants were recruited, but only 46 completed the study.

Additionally, the study examined the effects of the two diets on gene expression and markers of cholesterol formation and absorption.

The main research hypothesis was that milk fat enclosed in MFGMs, such as in cream, would raise cholesterol much less than fat without MFGMs.

Bottom Line: The study was a randomized trial. Participants were divided into two groups that received 40 g of milk fat. The only difference between groups was that the cream group got milk fat with MFGMs, but the butter group did not.

Finding 1: MFGMs in Dairy Fat Prevent an Increase in Cholesterol

The study confirmed the research hypothesis.

It clearly showed that butter increased the levels of blood cholesterol, whereas cream did not. These differences are likely caused by the presence of MFGMs in cream.

This chart shows how blood cholesterol rose in the butter and cream groups. 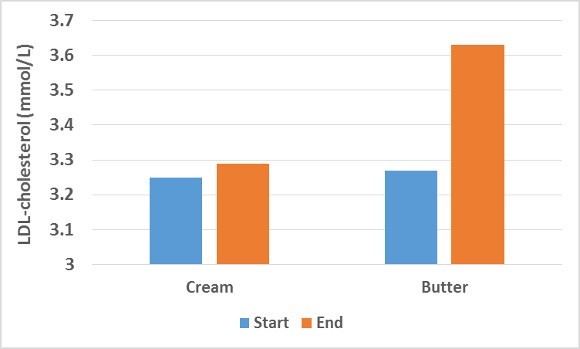 Here is an overview of how eating butter oil changed the levels of blood lipids and lipoproteins, compared to cream:

Butter caused a significant increase in all of these factors, which are known risk factors for heart disease.

However, not all blood lipids were significantly different between groups. For example, there was no difference in HDL-cholesterol, triglycerides, LDL:HDL ratio and apolipoprotein A-I.

Additionally, body weight and body composition remained relatively constant during the study. Body weight decreased slightly in the butter group, but the change was not statistically significant.

Simply put, these results indicate that butter fat has adverse effects on the blood lipid profile, whereas cream fat does not.

Supporting these findings, several animal studies have also shown that MFGMs may counteract the rise in cholesterol caused by saturated fats.

Bottom Line: Milk fat without MFGMs, such as butter, causes a rise in blood cholesterol. On the other hand, cream that contains MFGMs does not cause a significant increase in cholesterol.

How MFGMs moderate the effects of milk fat on blood lipids is unclear.

However, animal studies indicate that the MFGMs can lower blood cholesterol levels by changing gene expression in the liver.

In the present study, gene expression was examined in 30 women, randomly selected from both groups.

Although the function of most of these genes is not completely understood, some of them may be involved in the regulation of blood lipids.

In fact, changes in the expression of some of these genes were associated with increases in cholesterol.

In addition to changing gene expression, MFGMs may affect blood lipids by reducing cholesterol absorption in the digestive system.

This is supported by animal studies showing that sphingolipids or a mixture of milk phospholipids may reduce cholesterol absorption.

Bottom Line: Animal studies indicate that MFGMs may decrease cholesterol levels by reducing its absorption. The present study does not support this.

Discussion of Cream Consumption and Limitations of the Study

This study indicates that cream does not raise the levels of blood cholesterol.

However, this does not mean that cream should be consumed in high amounts. Cream is very rich in fat and calories, and may contribute to weight gain and obesity.

Being overweight is, in itself, a risk factor for heart disease and a variety of other chronic diseases.

Additionally, the results of the current study cannot be generalized. There are several reasons for this:

Bottom Line: Excessive consumption of cream may contribute to weight gain and obesity. However, low or moderate consumption is fine.

Not all high-fat dairy products have the same health effects.

Butter oil increases the levels of cholesterol in blood, whereas cream does not. This may be explained by MFGM, which surrounds the fat globules and counteracts the cholesterol-raising effects.

Simply put, cream appears to be healthier than butter because it contains MFGMs. How this affects hard endpoints, such as heart disease, remains to be seen.

Additionally, other studies on this topic have provided mixed results. Few have been conducted on specific dairy foods, so more research is needed before solid conclusions can be drawn.

That being said, no evidence justifies eating excessive amounts of cream. All high-fat dairy products should be eaten in moderation.

People with lipid problems or a family history of heart disease should probably minimize their consumption of butter. Extra virgin olive oil is a much better choice.