The role of dietary fat in body fat distribution is not well known.

However, some interesting results from the LIPOGAIN study were published in the July, 2014 issue of Diabetes.

This study compared the effects of overfeeding saturated and polyunsaturated fat on fat accumulation and body composition.

Here is a detailed summary of the findings. 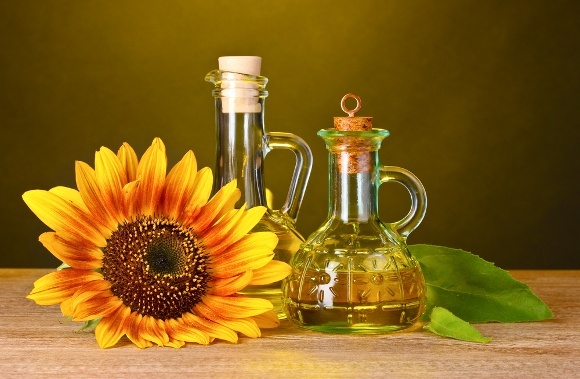 Visceral fat accumulates in the abdominal cavity, around organs such as the intestines, liver and pancreas.

Conversely, ectopic fat accumulates inside the organs themselves, mainly the liver and pancreas.

Both visceral and ectopic fat are associated with an increased risk of chronic disease, such as heart disease and type 2 diabetes.

A team of Swedish scientists set out to investigate the effects of eating high amounts of saturated fat and polyunsaturated fat on body composition and the accumulation of visceral and ectopic fat.

This was a 7-week, double-blind, randomized, parallel-group trial in 39 young and normal-weight men and women.

The purpose of the study was to compare the effects of eating high amounts of either saturated fat or polyunsaturated fat.

Participants were randomly assigned to one of two groups:

The amount of muffins was adjusted so that each participant would achieve a 3% weight gain during the study period.

On average, the daily amount of oil added to the muffins was about 40 grams, and the calorie excess was 750 kcal per day.

Bottom Line: This study was a randomized controlled trial in healthy, normal-weight individuals. It compared the effects of overeating palm oil and sunflower oil on fat accumulation and body composition.

Participants in both groups gained equal amounts of weight, or 1.6 kg (3.5 lbs).

However, those who were fed saturated fat gained significantly more fat mass, whereas polyunsaturated fat led to a greater increase in lean mass.

In fact, the ratios of lean and fat tissue gain in the polyunsaturated and saturated fat groups were approximately 1:1 and 1:4, respectively.

The chart below shows changes in fat mass and lean mass in both groups. 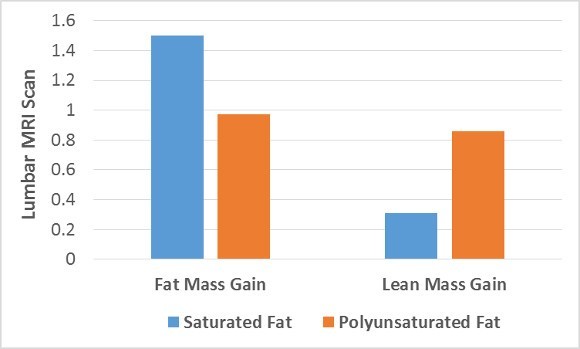 These findings are supported by previous studies, one in postmenopausal women and one in rats.

However, exactly how this works is unknown. It is also unclear what the current study’s increase in lean tissue actually represents or signifies.

There are two types of belly fat:

Visceral fat is much more harmful than subcutaneous fat, and is associated with various chronic diseases.

In the present study, participants who were fed saturated fat gained significantly more visceral fat, compared with those who got polyunsaturated fat. In fact, the difference was nearly two-fold.

The chart below shows the differences in visceral fat changes between groups. 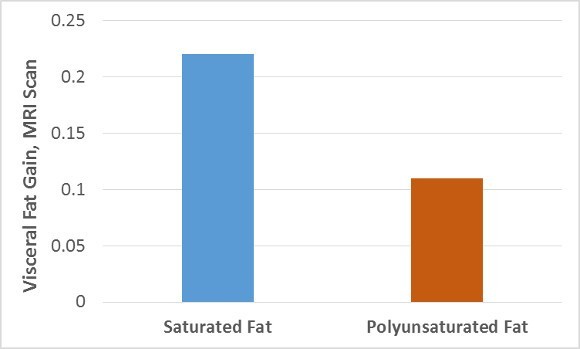 These results suggest that overeating polyunsaturated fat may cause less fat accumulation in the abdominal cavity, compared to saturated fat.

That being said, overeating is still unhealthy, no matter what you are eating — overeating polyunsaturated fat just seems to be less bad.

Participants who were overfed with saturated fat gained significantly more liver fat than those who ate polyunsaturated fat.

The chart below shows the differences in liver fat changes between groups. 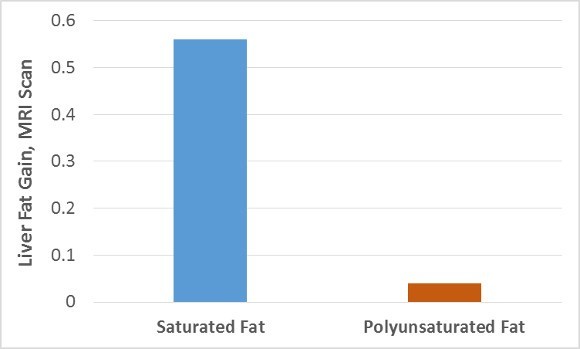 These results are well supported by several other studies.

Accumulation of liver fat may lead to an adverse condition known as non-alcoholic fatty liver disease (NFLD). NFLD is present in up to 75% of obese people.

Fatty liver is believed to contribute to the development of many chronic diseases, such as type 2 diabetes and metabolic syndrome.

On average, pancreatic fat decreased by 31%. There was no significant difference between groups.

This unexpected finding cannot be explained based on the study’s results, and needs to be confirmed by other studies before any solid conclusions can be reached.

Bottom Line: Pancreatic fat decreased significantly in both groups. The finding needs to be confirmed in other studies before any conclusions can be made.

This high-quality study appears to be well-designed and executed. Nevertheless, there are several limitations worth mentioning.

Sunflower oil contains more vitamin E than palm oil, and vitamin E may reduce liver fat. However, the amount of vitamin E in the sunflower oil was probably too low to have any significant effects.

The Results May Not Be Generalized

The study tested palm oil and sunflower oil, and may not be generalized to all saturated or polyunsaturated fatty acids.

Other Nutrients May Play a Role

The dietary context may play an important role in how the body reacts to high amounts of fat.

The muffins provided to participants were also high in fructose and refined carbs, which could have affected the findings.

The Study Examined Only Lean Individuals

All study participants were lean, so the results may not apply to obese or diabetic individuals.

Bottom Line: The study was well designed and executed. There are a few limitations, so the results should not be generalized.

To summarize the findings:

These results are of limited value for health-conscious consumers, since they may only apply to those that are overeating and gaining weight. However, a previous study showed a similar effect during a weight-maintenance diet.

That being said, this doesn’t necessarily mean that saturated fat is unhealthy, only that eating too much of it may have worse consequences compared to eating an equal amount of polyunsaturated fat. At least in the context of a high-calorie diet.

At the end of the day, overeating should be avoided and fat intake should be balanced.