Type 2 diabetes is a common condition characterized by high levels of blood sugar, usually due to insulin resistance.

The treatment of type 2 diabetes involves medication, but lifestyle strategies are very important as well.

These include increased exercise, weight loss and diet management. 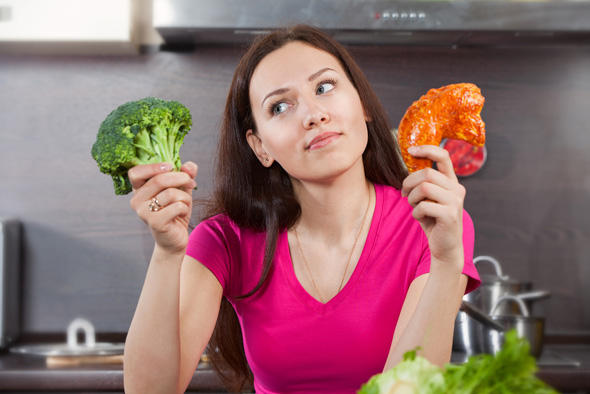 A team of Australian researchers set out to compare the long-term health effects of a low-carb diet and a high-carb diet, focusing on differences in blood sugar control and risk factors for heart disease.

This was a randomized trial that spanned one year, or 52 weeks total.

A total of 115 obese and overweight adults with type 2 diabetes participated. Their age ranged from 35 to 68 years.

The participants were randomly assigned to one of two diets that contained an equal amount of calories:

Both diets restricted calories in order to produce weight loss. Calories were restricted by 30%, which amounted to 500–1000 calories, depending on the individual.

The fat content of the diets was mainly unsaturated, with less than 10% of calories from saturated fats.

In addition, all participants had 60-minute, supervised exercise sessions three times per week. These sessions focused on moderate-intensity aerobic and resistance exercise.

Blood samples were taken at the beginning, in the middle (24 weeks), and at the end (52 weeks) of the study.

78 people completed the study, which is 68% of participants.

Due to regular exercise and the reduction of calories, participants in both groups lost weight and achieved significant health improvements.

This graph shows the weight changes in the two groups: 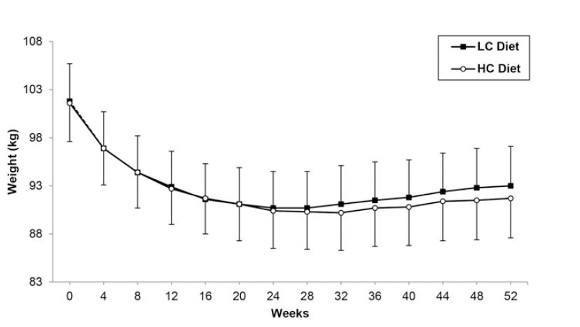 Changes in the following health markers were similar between groups:

These included improvements in the following:

This happens regardless of whether people follow low-carb or high-carb diets.

This study was well designed, but had a few limitations.

The main outcome variable of the current study was HbA1c.

HbA1c is also known as glycated hemoglobin. Measuring HbA1c gives clinicians and scientists an idea of the average blood sugar levels over the previous few months.

High HbA1c levels are associated with an increased risk of developing diabetes-related complications.

Some studies have found no significant differences in the effects of low- and high-carb diets on HbA1c. Conversely, other studies have reported greater reductions in HbA1c with LC diets.

Studies that have compared LC diets with calorie-restricted HC diets among patients with type 2 diabetes have provided mixed results.

In the current study, both diets contained the same amount of calories, and weight loss was similar.

This suggests that the main cause of weight loss is calorie deficit rather than the nutrient composition of the diets. Several previous studies support this.

In the current study, similar reductions in LDL-cholesterol were seen in both the LC and HC diets.

These differences may be explained by the type of fat replacing carbs in LC diets. In the present study, carbs were replaced with unsaturated fat, which may lower LDL-cholesterol.

Conversely, saturated fats may raise the levels of LDL-cholesterol.

In conclusion, reducing calories and increasing exercise can lead to weight loss and improved health — regardless of whether people are on a low-carb or high-carb diet.

However, for obese people who have type 2 diabetes, a low-carb diet seems to be more effective at improving blood sugar control and reducing the risk factors for heart disease.

This is supported by several studies showing that low-carb diets are effective for diabetics.