Obesity is one of the most common consequences of the Western lifestyle.

Unsurprisingly, obesity is not only a matter of weight. It is also associated with a variety of health problems.

The most common health problems associated with obesity are collectively known as metabolic syndrome.

Insulin resistance and type 2 diabetes are among the main components of this syndrome, but how they are linked with obesity is not clearly understood.

A team of scientists at Temple University, Philadelphia, set out to investigate how overeating and obesity may be linked with insulin resistance.

Six healthy, middle-aged men volunteered to participate in the study.

Half of them were normal weight, while the rest were slightly overweight.

None of them had a family history of diabetes or other endocrine disorders, and they were not taking any drugs.

They spent one week at a hospital, where they were overfed and confined to their rooms to minimize physical activity.

Their diet consisted of approximately 6000 kcal per day, a whopping 200–250% increase in their normal calorie intake.

Various blood analyses were done every day, while other measurements, such as fat biopsies, were only performed at the beginning and end of the study. Body weight and composition were also measured.

By the end of the study, the participants had gained an average 3.5 kg, all in the form of fat mass. 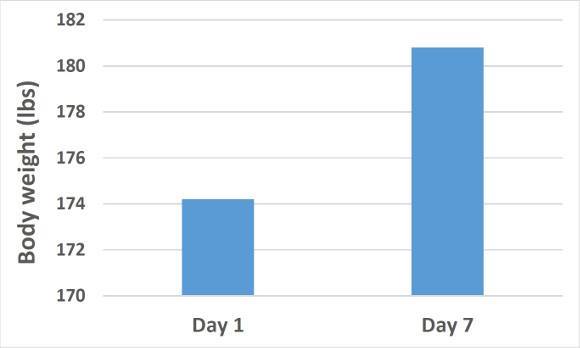 This chart shows how fasting insulin changed during the study (increased by 150%): 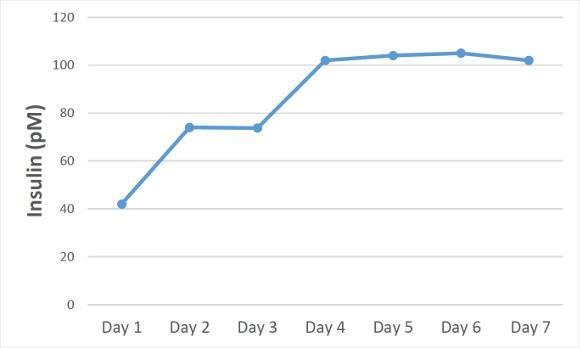 In addition, oxidative stress increased significantly during the study.

The source of this oxidative stress was found in fat tissue, as evident from fat biopsies. Apparently, fat tissue is particularly stressed during periods of overeating.

Most importantly, the study strongly suggests that oxidative stress was the cause of insulin resistance in the study participants.

Insulin resistance did not seem to be triggered by elevated levels of free fatty acids (FAA) or increased inflammation. Both remained constant during the study period.

It indicates that insulin resistance is caused by oxidative stress associated with increased storage of fat in fat tissue.

The oxidative stress seems to disrupt blood sugar regulation by damaging GLUT4, a protein responsible for transporting glucose from the bloodstream into cells.

Apart from the small number of participants, the study doesn‘t have any obvious limitations.

However, for comparison, it would have been useful to have a control group receiving a weight-maintenance diet.

As the researchers point out, inactivity is likely responsible for a part of the adverse changes seen in the study.

A slower and less pronounced increase in insulin resistance has been found in other studies feeding participants less amounts of excess calories.

One 8-week study in 29 healthy men investigated the effect of increasing calorie intake by 40%. It found an 18% increase in insulin resistance.

Another study in 40 healthy men and women showed that eating an excess of 1040 kcal/day for a month decreased insulin sensitivity by 8%.

Previous research also indicates that insulin resistance is linked with oxidative stress and that adipose tissue is heavily stressed during overeating.

For this reason, several human trials have tried to decrease insulin resistance by using antioxidants (compounds that act against oxidative stress). However, their results have been inconsistent.

The results of the current study are supported by studies of cells in test tubes, showing that oxidative stress causes insulin resistance on the cellular level.

In short, this study clearly shows that drastic overeating and inactivity are seriously unhealthy. They increase oxidative stress and cause insulin resistance in as little as two days.

Simply put, overeating and lack of exercise may explain what causes insulin resistance – a leading driver of metabolic syndrome and type 2 diabetes, which are currently massive health problems worldwide.