Besides storing fat, the body has several methods to survive periods of food shortage and starvation.

One of them is called adaptive thermogenesis, sometimes referred to as “starvation mode”.

It involves a reduction in the amount of calories your body burns, resulting in slower weight loss and faster weight regain.

It is defined as a decrease in resting energy expenditure during calorie restriction, beyond what can be explained by reduced mass of muscles, organs and fat.

Adaptive thermogenesis is seen when people continuously restrict calories by dieting and/or exercising. It may also be caused by weight loss drugs or surgery.

Although adaptive thermogenesis is well-known, how it works remains unclear. 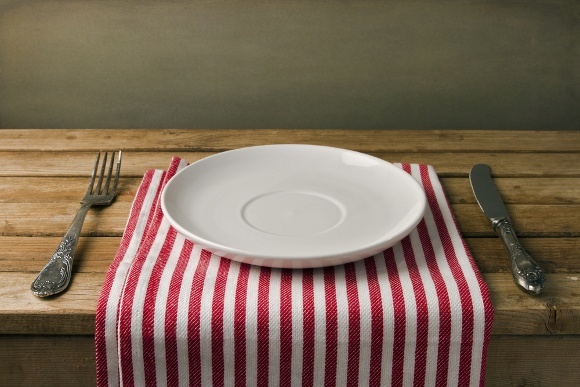 Starvation Mode: When You Eat Less, Your Body Burns Less

German researchers set out to investigate the causes and dynamics of adaptive thermogenesis (starvation mode).

They wanted to find out how body composition affects adaptive thermogenesis, whether it causes changes in hormones, and what effect it has on weight regain.

The article describes the results of two related studies from Christian Albrechts University, in Germany.

The design was similar to the famous Minnesota Starvation Experiment from 1950, one of the most important early studies on the effects of starvation in humans (4).

This 6-week intervention study included 32 healthy, non-obese men, between 20 and 37 years of age.

Before the intervention started, participants spent 10 weeks at the university’s metabolic ward where their energy needs were calculated.

The intervention was divided into three parts:

All participants spent every day, from 8 AM to 6 PM, at the university’s metabolic ward, where they were measured and monitored.

Dietary intake was strictly controlled. All foods were weighed and all meals supervised.

Additionally, participants were encouraged to avoid any physical activity and to remain sedentary.

The levels of various hormones and other relevant body processes were also analyzed throughout the study.

A smaller follow-up study was done 1.5 years later than the original study.

This study included only eight of the participants that took part in the first study.

Its purpose was to estimate the effects of short-term calorie restriction on adaptive thermogenesis.

Additionally, it examined whether the results of the earlier study were reproducible.

It was divided into two parts:

Otherwise, the methods were similar to the first study.

This chart below shows the changes in body composition over the course of the study (click to enlarge): 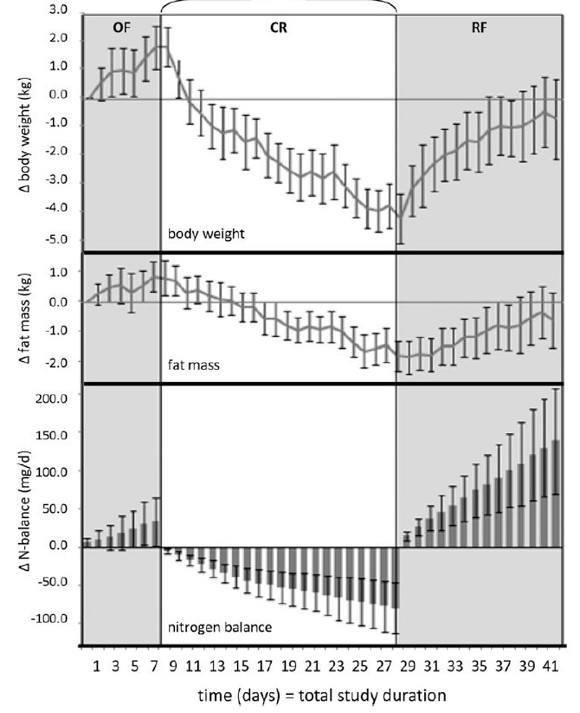 After three weeks of calorie restriction, body weight decreased by 6 kg (13.2 lbs – 7.5%) and resting energy expenditure dropped by 266 calories per day, on average.

Adaptive thermogenesis was detected in 60% of participants in the early stages of calorie restriction. It became significant on the third day.

It was partly responsible for the decrease in energy expenditure, accounting for 108 calories/day.

Of these 108 calories per day, 36 were explained by changes in the composition of fat-free mass, leaving 72 calories for “true” adaptive thermogenesis.

It was also not linked to hormonal changes, such as in leptin, ghrelin, adiponectin and thyroid hormone levels (T3).

Lastly, adaptive thermogenesis appears to have no long-term effects on weight or fat regain after short-term calorie restriction. The effect was reversed within two weeks of re-feeding.

Here you can see how energy expenditure changes from adaptive thermogenesis developed during the course of the study: 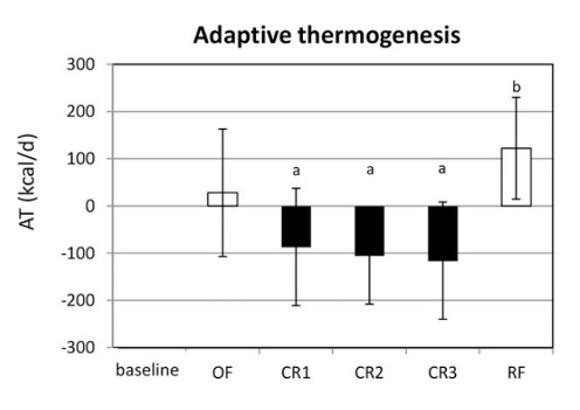 As you can see, the increase during the re-feeding phase completely reversed the decrease seen during the calorie restriction phase.

The main conclusions of the study were as follows:

The study has no apparent limitations. It was tightly controlled and had highly significant results.

However, since the participants were limited to healthy, sedentary, non-obese men, the results may not be generalized to all people.

For example, it is possible that the dynamics of of adaptive thermogenesis are vastly different in people with obesity.

In general, adaptive thermogenesis (AT) is considered to be an automatic response to food shortage.

In the Minnesota Starvation Experiment from 1950, resting energy expenditure declined by 39% (600 calories/day). About 35% of this decline was not caused by changes in body composition, which indicates that AT also played a role.

Reduced levels of leptin and thyroid hormone (T3) have often been considered as major determinants of AT.

Although the current study showed reductions in both leptin and T3, it did not support a causal relationship between AT and changes in these hormones.

This is supported by studies on obese patients after weight loss. They found no significant associations between AT and reductions in leptin and T3.

Some studies indicate that AT may contribute to increased weight regain after calorie restriction.

This effect has been referred to as the “fat overshooting” phenomenon.

According to the current study, this effect is reversed within 2 weeks of re-feeding.

In short, adaptive thermogenesis (AT) is one of the main reasons your body starts burning fewer calories when you lose weight.

It is a part of the reason why weight loss tends to slow down over time, and is often referred to as “starvation mode.”

In the current study, significant adaptive thermogenesis was detected as early as on the third day of calorie restriction.

Unfortunately, there is no known way to completely prevent this from happening.

Additionally, by exercising more and staying active throughout the day, you can negate some of the reduction in energy expenditure.