Even though obesity has been associated with poor vitamin D status, the evidence that vitamin D affects obesity is not entirely conclusive.

For this reason, researchers set out to examine the effects of vitamin D supplements on body fat levels, insulin sensitivity and circulating vitamin D levels. They also looked at the effects of genetics on responses to vitamin D.

Here is a detailed summary of the results, recently published in the British Journal of Nutrition. 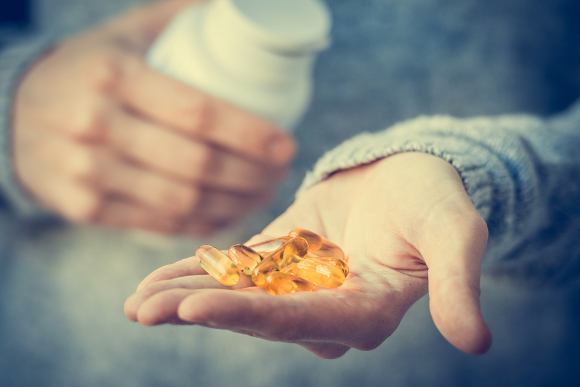 The Benefits of Vitamin D May Depend on Your Genes

Central obesity involves having a lot of fat around the waist. It is primarily caused by excessive belly fat, especially around the organs.

Central obesity has been associated with various chronic diseases, such as type 2 diabetes and heart disease.

Some people are more prone to central obesity than others, which may be partially explained by genetic factors.

Nutritional factors, such as poor vitamin D status, may also play a role.

Iranian researchers examined the effects of daily vitamin D supplements on markers for central obesity. They also investigated whether these effects depended on individual genetic make-up.

This was a 12-week, randomized trial in 60 Iranian men and women with type 2 diabetes. 88% of the participants were obese, while the rest were overweight.

Participants were randomly assigned to one of two groups:

These values were then compared between groups.

In the second part of the study, the genetic make-up of participants in the vitamin D group was examined. This is discussed below.

Bottom Line: This was randomized trial in diabetic and overweight Iranian men and women. Participants were randomly assigned to receive vitamin D supplementation or a placebo.

A genotype simply refers to the genetic make-up of each individual.

For example, when referring to individuals that have different variants of a specific gene, we talk about different genotypes.

The present study focused on variants of the Cdx-2 gene, which is associated with vitamin D function.

The participants were divided into three groups, depending on their genotype:

The benefits of vitamin D supplementation were then compared between genotypes.

Other studies have also examined the frequency of these genotypes, which appears to vary by race. For example, the AA genotype is found in 18% of South Asians, but only 4% of Europeans (8, 9).

Bottom Line: The study divided the study participants into three groups based on genotype. The benefits of vitamin D supplementation were then compared between genotypes.

Finding 1: Vitamin D Levels Did Not Increase in All Genotypes

Overall, circulating vitamin D levels increased significantly in many of the participants who were given vitamin D supplements.

However, vitamin D levels did not increase for everyone receiving supplements.

The table below shows the rise in vitamin D between genotypes. 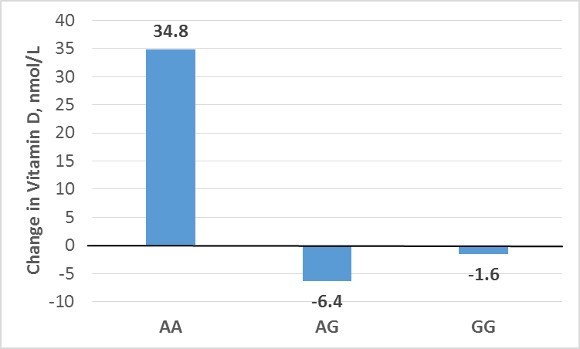 These results indicate that not all people benefit from vitamin D supplementation.

This unexpected finding needs to be confirmed by other studies before any solid conclusions can be reached.

Bottom Line: Vitamin D levels did not increase in all of those who were supplemented. In fact, they rose only in those who had the AA genotype.

The table below shows the difference in total fat percentage between genotypes. 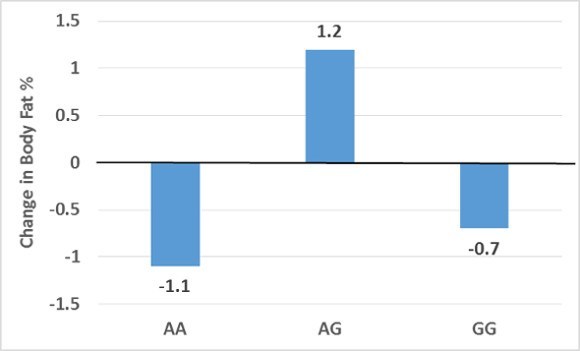 These results indicate that supplementing with vitamin D may be a useful weight loss strategy, at least for some people.

Bottom Line: Supplementing with vitamin D reduced central obesity. However, this effect was only significant in participants with the AA genotype.

Insulin sensitivity increased significantly in the vitamin D group, compared with the placebo.

Within the vitamin D group, insulin sensitivity increased most among those with the AA genotype.

No significant differences were seen in other markers of blood sugar control.

This study appears to have been well-designed and executed.

However, some of the research methods were inaccurate. For example, the researchers used bioelectrical impedance analysis (BIA) to measure body fat.

The results also cannot be generalized to all people, since the participants were Iranian. These findings need to be confirmed in other racial groups.

Additionally, the participants were middle-aged and elderly, as well as diabetic and overweight or obese. Vitamin D supplementation may have different effects in healthy, young people.

Finally, the study period was only 12 weeks. Although this is a relatively long period for a randomized trial, a longer study might have told a different story.

Bottom Line: The study appears to have been well-designed and executed, although some of the methods were inaccurate. The results also may not be generalized to all people or supplementation time frames.

In short, this study shows that vitamin D supplementation can have many health benefits.

However, not all people benefit equally from vitamin D supplementation. The benefits appear to depend on people’s genes.

This reminds us that generalizing is not always appropriate in nutritional science. People sometimes react differently to what they are eating.

At the end of the day, vitamin D supplementation may provide many health benefits. The magnitude of these benefits varies, depending on people’s genetic make-up.