Obesity is a serious health concern. In both children and adults, it may increase the risk of several chronic diseases, such as type 2 diabetes and heart disease.

For successful weight loss, multiple strategies are usually required. One effective approach may be to eat more protein.

For this reason, researchers set out to see if high-protein breakfasts could help burn calories and reduce appetite in overweight and normal-weight children.

“Calories burned” refers to the rate at which the body uses energy.

Compared to fat and carbs, protein has a greater thermic effect and is considered very weight-loss friendly.

Protein contains many fewer calories than fat, by weight. And, although its calorie content is equal to that of carbs, eating more protein appears to speed up our metabolism. This temporarily increases the amount of calories burned. 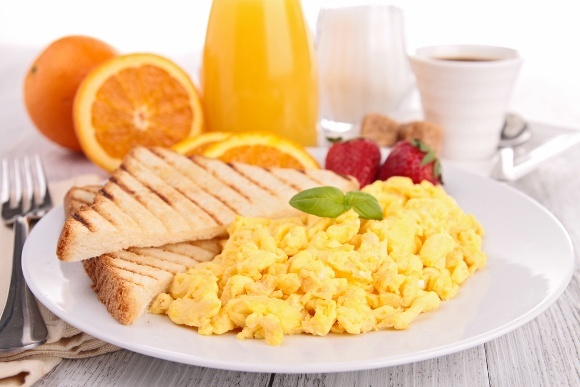 Researchers at the University of Arkansas set out to examine whether a high-protein breakfast could help burn calories and reduce appetite, when compared to a high-carb breakfast.

The results were recently published in the Journal of Nutrition:

The study was a randomized, crossover study in normal-weight and overweight children, aged 8–12.

A total of 35 girls and boys participated, but only 29 completed the study.

The children were randomly assigned to one of two groups:

Since the study had a crossover design, all participants had both types of breakfast on separate occasions.

Immediately after eating breakfast, energy expenditure, fat and carb oxidation, appetite and blood sugar were measured over a 4-hour period.

Additionally, food intake was estimated at the end of the testing period by providing participants with a free lunch buffet and recording how much they ate.

Bottom Line: The study was a randomized, crossover trial in overweight and normal-weight children. The study compared the effects of high-protein and high-carb breakfasts on appetite and calories burned.

The high-protein breakfast increased the amount of calories burned in both the normal-weight and overweight children.

Here is an overview of the main results:

The effect of protein on calories burned is well known. Many studies have shown that high-protein meals increase the amount of calories burned, compared to meals that are high in carbs.

Bottom Line: The high-protein breakfast increased the amount of calories burned after the meal more than the high-carb breakfast did. This is supported by previous studies.

All participants were less hungry and felt more full after the high-protein breakfast, compared to the high-carb breakfast.

Here are the results:

All of these differences were independent of body weight.

These results are supported by previous studies showing that eating high-protein meals may increase fullness and reduce hunger.

However, in the present study there was no significant difference in food intake between groups at the lunch buffet.

This is supported by one study in children who had a low-glycemic breakfast. While they remained full for a longer time, there was no effect on food intake at lunch.

Bottom Line: The high-protein breakfast was more filling than the high-carb breakfast, resulting in decreased hunger and increased fullness.

In overweight children, the high-protein breakfast appeared to increase fat oxidation and energy expenditure to a greater extent than in normal-weight children.

After the high-protein breakfast, the energy expenditure was 4.09 and 3.68 kcal/240 min among the overweight and normal-weight children, respectively.

This indicates that protein may have stronger effects on burning calories in overweight children.

Both breakfasts resulted in similar increases in blood sugar.

However, there were some differences:

These results indicate that the high-protein meal is better at moderating blood sugar levels and preventing large fluctuations.

This is supported by previous studies showing that diets high in protein may improve blood sugar control.

The study had a few limitations:

In short, the study shows that high-protein breakfasts can help burn calories and reduce hunger.

They temporarily cause more calories to be burned, when compared to high-carb breakfasts. Additionally, they may help reduce appetite for a few hours.

At the end of the day, adding protein to your meals may be a valuable long-term strategy against weight gain and obesity.