Probiotics are bacteria that have health benefits when consumed. They are found in probiotic supplements and some fermented foods.

Several studies indicate that probiotics can be useful in the battle against weight gain and obesity.

This study examined the effects of a broad-spectrum probiotic supplement on weight gain during a high-fat, high-calorie diet. 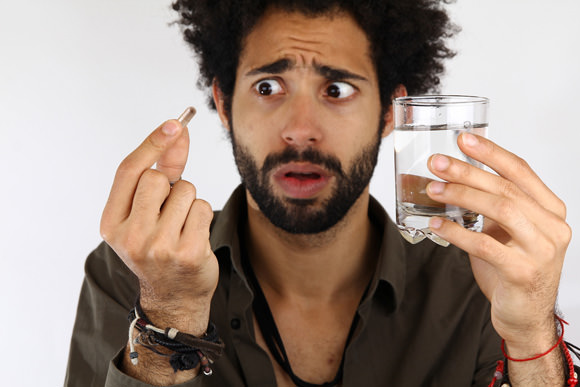 People who have obesity and/or type 2 diabetes may have more undesirable bacteria in their digestive system than beneficial bacteria.

Although the cause of this imbalance is not entirely clear, evidence indicates that high-fat, high-calorie diets may cause unfavorable changes in the bacterial environment in the gut.

This may be the cause of the systemic inflammation associated with obesity and metabolic syndrome.

For this reason, dietary strategies that positively affect the gut bacteria may potentially benefit people with obesity or metabolic diseases.

One such strategy is supplementation with probiotic bacteria, like Lactobacillus andBifidobacterium.

Previous studies have shown that probiotics may decrease the growth of undesirable bacteria and reduce inflammation in the digestive system.

Researchers at Virginia Tech set out to examine whether a probiotic supplement would reduce weight gain on a high-fat, high-calorie diet.

All participants were also put on a weight-gain diet, containing an excess of 1000 calories. This diet was high in fat, containing 55% fat, 30% carbs and 15% protein.

Several variables were measured at the beginning and the end of the study; these included body composition, insulin sensitivity, endotoxins and inflammatory markers.

Bottom Line: This was a 4-week, randomized controlled trial in 20 healthy, non-obese men. They were assigned to one of two groups: probiotic supplementation and placebo.

The probiotic supplementation reduced gain in body mass and fat mass, compared to the placebo.

The chart below shows the difference in weight gain between groups. 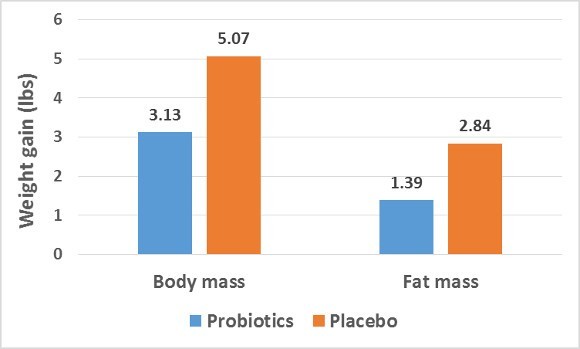 These results are consistent with other studies that have reported weight loss in obese people taking probiotic supplements.

An additional study showed that taking probiotic supplements might reduce weight gain during 7 days of overfeeding.

The present study shows that these effects are sustained for up to 4 weeks.

How probiotics reduce weight gain is unclear, but it may have something to do with the amount of calories that are absorbed from the digestive system.

Further studies are needed to determine exactly how this works.

The high-fat, high-calorie diet did not affect insulin sensitivity in the participants.

Probiotic supplementation also had no effects on insulin sensitivity, and these results are consistent with a few previous studies.

However, they conflict with one study showing that probiotic supplementation may prevent development of insulin resistance during 7 days on a high-fat, high-calorie diet.

Other studies also indicate that probiotic supplementation may reduce or prevent insulin resistance.

The reason for this inconsistency is unclear.

Bottom Line: Neither the high-fat diet nor the probiotic supplements had any effects on insulin sensitivity. Other studies have provided mixed results.

Endotoxins, also known as lipopolysaccharides, are found in the membranes of some gut bacteria.

These compounds may find their way into the blood circulation of individuals with an imbalance in the bacterial environment in the gut.

In fact, previous studies have shown that high-fat, high-calorie diets may cause a small increase in the levels of endotoxins in blood.

In the present study, the levels of endotoxins did not change in either group.

Systemic inflammation is estimated by measuring inflammatory markers in the blood.

TNF-α increased significantly in both groups during the 4 weeks of the high-fat, high-calorie diet.

CRP did not change significantly during the study period. IL-6 seemed to increase, but the change was not statistically significant.

Probiotic supplementation had no effects on the change in inflammatory markers.

Bottom Line: The high-fat, high-calorie diet increased levels of TNF-α, a marker of inflammation. Probiotic supplementation did not affect this increase.

The study was well designed. However, as in most studies, there were a few important limitations.

Second, the study included only healthy, non-obese men. For this reason, the results cannot be generalized. The effects might be different in obese people or women.

The probiotic supplement also contained multiple strains of bacteria, which may have different effects on health. For this reason, it is unclear which probiotic bacteria were responsible for suppressing weight gain.

Bottom Line: This study was well designed and conducted. However, the number of participants was low and the findings may not apply to women or people with obesity.

This study evaluated whether probiotic supplements would help protect against the adverse effects of consuming a high-fat, high-calorie, weight-gain diet.

Neither the diet nor the probiotics had significant effects on insulin sensitivity or endotoxin levels.

The diet did cause an increase in one inflammatory marker, but the probiotics did not have any effect.

However, this study did show that people who took a probiotic supplement gained significantly less weight and fat mass. This indicates that probiotics may be an effective way to prevent weight gain and obesity.

Probiotics may even be useful for weight loss if the diet is not hypercaloric, but the current study did not test that.