The bacteria that live in our digestive system significantly influence our health in a number of ways.

Commonly known as the gut microbiota, these bacteria can be either beneficial or harmful, all depending on what types of bacteria are present and their relative amounts.

A recent review discussed the development of the gut microbiota early in life, focusing on how it’s influenced by maternal weight status.

Below is a summary of the review’s main points. 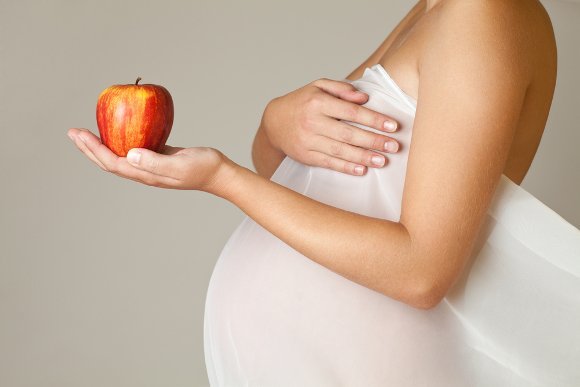 This was a scientific review on the gut microbiota during infancy and the factors that affect it.

Microbial transmission from mothers with obesity or diabetes to infants: an innovative opportunity to interrupt a vicious cycle.

Early Development of the Gut Microbiota

The gut microbiota is believed to play a key role in the development of many chronic diseases, as discussed in a previous review.

For this reason, maintaining a healthy and balanced microbiota is important for health.

The gut microbiota of infants is highly variable between individuals. It also fluctuates over time, reaching stability at around age two.

Some evidence suggests that the infant microbiota may influence the gut environment later in life, possibly affecting health.

Bottom Line: Studies suggest that the gut microbiota of infants may affect health later in life.

How Do We Inherit Microbes From Our Mother?

We may inherit microbes from our mother in several ways:

Bottom Line: Children are colonized by maternal bacteria when they are born and while they are breastfeeding. Recent studies suggest that unborn children may also be colonized by bacteria living inside the uterus.

What Factors Affect the Microbiota in Infants?

Various factors may affect the development of the gut microbiota in young children.

These include type of birth, breastfeeding, maternal health status and metabolism, weight gain during pregnancy, genetics and use of antibiotics.

These are discussed in greater detail below.

Our health later in life may be affected by nutrient excess or deficiency while we were still in the womb.

In fact, maternal obesity and diabetes are among the strongest risk factors for these metabolic disorders in children.

What’s more, the newborns of obese or diabetic mothers have higher amounts of liver fat, increasing their risk of developing non-alcoholic fatty liver disease as they grow older.

Attempting to explain this, some researchers have speculated that bacterial toxins, “leaking” from the gut into the bloodstream of obese mothers, may affect the development of the fetus.

There is also some evidence that maternal obesity may influence the gut microbiota in early infancy.

For example, bacteria belonging to the class Gammaproteobacteria are among the first to dominate the microbiota in young infants.

Although Gammaproteobacteria promote inflammation, they may be necessary for the normal development of the immune system – preventing the risk of autoimmunity in the gut.

A few studies in humans and animals indicate that the levels of Gammaproteobacteria are lower in the offspring of obese mothers.

Bottom Line: Having an obese and/or diabetic mother is strongly associated with an increased risk of developing these disorders. However, the role of the gut microbiota in this relationship is unclear.

Children who are born the normal way are colonized by bacteria that live in their mother’s birth canal and intestinal tract.

Conversely, children that are delivered via a cesarean section are initially colonized by bacteria that live on their mother’s skin.

The way children are born can make its mark on the gut microbiota for up to two years.

However, observational studies suggest that its health effects may persist for longer.

Being born via a cesarean delivery is associated with a 46% greater risk of obesity at age seven, and a 20% increased risk of type 1 diabetes, compared to children born naturally.

Bottom Line: Being born via a cesarean section affects the development of the gut microbiota. It has been linked with a higher risk of childhood obesity.

Breastmilk contains several compounds that are important for the development of a healthy gut microbiota.

These include human milk oligosaccharides, which function as prebiotic fiber, stimulating the growth of beneficial Bifidobacteria.

Human milk is also a source of microbes, mostly Bifidobacteria and Lactobacillus, which are also a part of the normal microbiota in healthy infants.

For these reasons, formula-fed infants have a lower diversity of Bifidobacteria in their gut, compared to breastfed infants.

However, not all milk is the same. The breastmilk of obese women seems to be slightly different from that of normal-weight women, containing higher levels of inflammatory markers, insulin and sugar.

These differences might affect infants’ gut microbiota, but the health relevance is unclear.

Nevertheless, all women are encouraged to breastfeed, regardless of their weight status. Breastmilk has various benefits for young children.

What’s more, several observational studies suggest that breastfeeding may reduce the risk of obesity in children.

Bottom Line: Breastmilk has beneficial effects on the gut microbiota in children, and may even reduce the risk of childhood obesity.

Some scientists are concerned that using antibiotics may cause an imbalance in the gut microbiota.

Adding to these concerns, several observational studies suggest that using antibiotics during the first two years of life may increase the risk of childhood obesity.

What’s more, one study found that when mothers were given antibiotics during the second or third trimester of pregnancy their children were 84% more likely to become obese at age seven.

This is supported by mouse studies showing that antibiotic use in the first 6-12 months of life is associated with an increased risk of obesity and belly fat from age 2 up to 9 years.

Bottom Line: Using antibiotics may imbalance the gut microbiota, at least temporarily. Some observational studies suggest that taking antibiotics during early infancy may increase the risk of obesity.

Ways to Improve the Gut Microbiota in Infants

In addition to breastfeeding, supplementing with probiotics and prebiotics may lead to significant improvements in the gut microbiota.

Studies in mice and humans show that probiotics and prebiotics may improve the gut microbiota, and reduce body weight and inflammation.

Additionally, some studies in pregnant women indicate that supplementing with probiotics may affect the gut microbiota composition of their children.

One randomized controlled trial in 122 mothers and their children examined the effects of supplementing with Lactobacillus rhamnosus and Bifidobacter lactis.

The study showed that supplementing from week 36 of pregnancy until delivery increased the counts of beneficial Bifidobacteria in the infants’ gut when they were three months old.

Bottom Line: Exclusive breastfeeding for the first 6 months of life promotes a healthy gut microbiota. After that, supplementing with pro- and prebiotics may provide an added benefit.

In short, multiple factors affect the development of the gut microbiota in infants.

Being born via a cesarean section, or having an obese or diabetic mother, is linked with an increased risk of an imbalanced gut microbiota and obesity.

Conversely, breastfeeding and taking probiotics is associated with improvements in the gut microbiota and a reduced risk of developing obesity.