Not everyone is equal when it comes to losing weight.

Multiple factors determine whether people are successful or not. Growing evidence suggests that one of them is thriftiness.

Recently, a group of researchers examined the association of thriftiness with body fat and body temperature.

Today’s research review provides a detailed summary of their findings.

Calorie expenditure is the rate at which you burn calories.

Previous studies suggest that a “slow metabolism” or low resting calorie expenditure is not the underlying cause of obesity in most people.

In fact, obese people may burn more calories at rest, compared to normal-weight people, as we discussed previously.

Yet, growing evidence shows that other aspects of calorie expenditure may explain why some people have a greater tendency to gain weight over time.

Some people are better adapted at preserving calories during periods of calorie deficit or malnutrition. These people are of the “thrifty phenotype.”

Most studies define thrifty individuals as having a greater decrease in calorie expenditure during fasting, compared to others.

This means that it’s more difficult for them to lose weight through dieting or fasting. One study showed that thrifty individuals lost less weight during a weight loss program.

A team of scientists examined whether the decrease in calorie expenditure while fasting was associated with fat mass and body temperature.

This observational study examined whether changes in calorie expenditure in response to fasting were associated with body fat and body temperature.

The study was based on the results of two studies conducted at the National Institute of Diabetes and Digestive and Kidney Diseases (NIDDK) in Phoenix, Arizona.

Data from 77 men and women who participated in the studies was included in the final analyses. Their body mass index ranged from 17.8 to 50.

The researchers examined how calorie expenditure changed during three 24-hour periods — weight maintenance, overeating and fasting — during which the participants spent their time at the research unit.

During the 24-hours of weight maintenance and overeating the participants followed a standard diet.

The diet consisted of 4 meals (breakfast, lunch, an afternoon snack and dinner) and provided 50% of calories from carbs, 30% from fat and 20% from protein.

While the participants stayed at the research unit, the researchers measured the following:

Bottom Line: This was an observational study examining how the response of calorie expenditure to fasting (starvation response) was associated with body fat and body temperature.

The study showed that calorie expenditure decreased by 8%, on average, during fasting.

This is a natural response that reduces the risk of starvation during periods of food shortage, also known as starvation response, starvation mode, metabolic adaptation or adaptive thermogenesis.

One study suggested that the starvation response may persist over a few years, as discussed in our previous research review.

Bottom Line: Fasting for 24 hours significantly decreased calorie expenditure. This effect is known as the starvation response or adaptive thermogenesis.

On average, overeating caused a 9.7% increase in calorie expenditure.

This effect is known as diet-induced thermogenesis or the thermic effect of food (TEF).

Previous studies indicate that TEF is influenced by various factors. For example, high-protein meals cause a greater TEF, compared to high-carb meals, and it appears to be stronger early in the day.

Bottom Line: Overeating for 24 hours caused a significant increase in calorie expenditure. This phenomenon is known as the thermic effect of food.

Finding 3: Some Individuals Had a Thrifty Phenotype

Not everyone responded to calorie deficit or excess in the same way. In fact, the response varied significantly between individuals.

Based on this response, the researchers divided the participants into two categories: thrifty and spendthrift individuals.

The chart below shows the average differences in the responses of calorie expenditure to fasting and overeating. 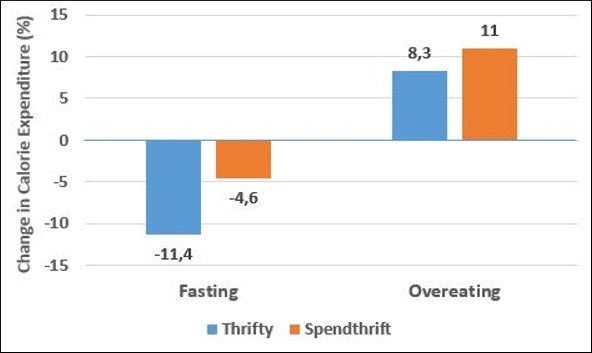 Bottom Line: The researchers divided the participants into two categories – thrifty and spendthrift – depending on how their calorie expenditure changed in response to 24-hour fasting.

Thrifty individuals had a significantly lower core body temperature while fasting, overfeeding and during weight maintenance.

On average, thrifty men had a 0.29 °F lower core body temperature, compared to spendthrift men, as shown in the chart below. 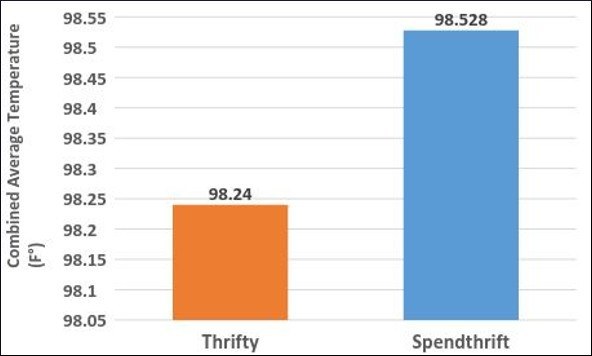 Body temperature and starvation response were significantly associated. Specifically, a 0.18 °F drop in core body temperature was linked to a 1.4% greater decrease in calorie expenditure during fasting.

A few previous observational studies have found that obese individuals have a lower body temperature, compared to normal-weight people, but not all studies agree (10,11, 12, 13, 14).

Those who were categorized as thrifty had significantly greater total fat mass and abdominal fat, compared to those who were spendthrift.

On average, thrifty individuals had 15.4 lb more fat mass and 3.8 lb more abdominal fat, compared to spendthrift individuals. These findings are presented in the chart below. 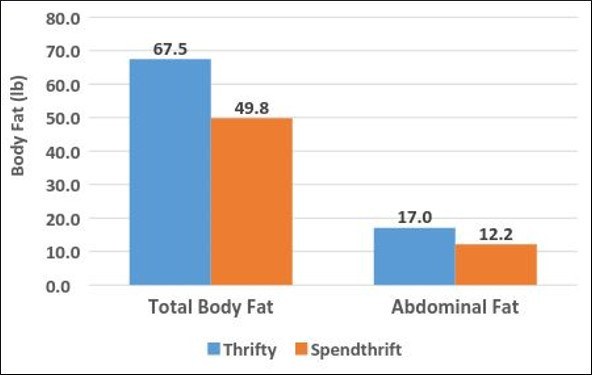 Similar results were obtained when the analyses were limited to men.

These results suggest that thrifty individuals have a greater tendency to gain weight, compared to their spendthrift counterparts.

They may also have greater difficulty losing weight while dieting. This is supported by one previous trial showing that thrifty, obese individuals were less successful at losing weight during a 6-week weight loss program that reduced calories by 50% (5).

The main limitation of the study was its observational design.

Although the results are valid, they do not allow any conclusions about causality.

For example, it is unknown whether thriftiness leads to obesity, or if obesity makes people thrifty. However, previous studies support the former possibility (5, 15).

In short, this study confirms that some obese people are better at conserving calories than others.

The authors of the present study labeled them as “thrifty.” Thrifty individuals tended to have greater total fat mass, abdominal fat and lower body temperature, compared to those who were “spendthrift.”

What’s more, the starvation response of thrifty individuals was stronger, and the thermic effect of food was weaker.

Although these findings have limited real-life application, they show that not everyone is equal when it comes to losing weight.