To successfully lose weight and keep it off, you usually need to change your lifestyle.

Short-term dieting doesn’t work in the long-term, since most people just gradually gain the weight back again. What’s more, some people have suggested that fast weight loss may cause even greater weight regain.

For this reason, researchers from the Netherlands compared weight regain after rapid and slow weight loss. Their findings were recently published in Obesity. 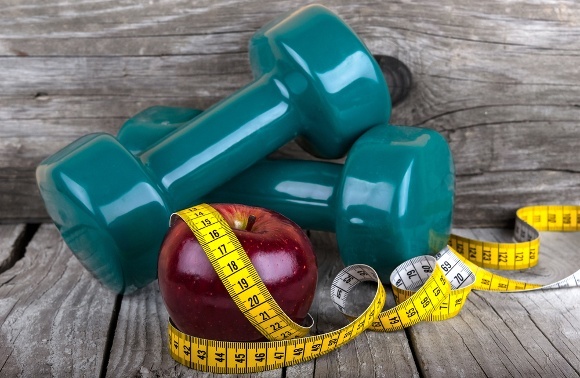 Another study found that two years after dieting the participants had, on average, regained approximately 70% of the weight they lost.

A widely held belief is that fast weight loss causes people to regain more body fat later on, but this has not been scientifically proved.

The idea seems scientifically plausible, due to low protein intake and a loss of muscle mass, which are explained below:

However, previous studies have found no evidence that fast weight loss leads to more weight regain, when compared to more gradual weight loss.

This article describes the findings of a randomized trial comparing the effects of fast and slow weight loss on weight regain after dieting.

The Effect of Rate of Weight Loss on Long-Term Weight Regain in Adults with Overweight and Obesity.

The purpose of this randomized trial was to examine whether losing weight fast has any effects on weight regain after dieting stops.

A total of 61 overweight or obese men and women started the study. They were randomly assigned to one of two groups:

After the calorie-reduced diet, the participants went on a 4-week weight maintenance diet. Their weight regain was then monitored for 9 months after they stopped dieting.

At the start and end of each of the study periods, the researchers measured body weight and composition.

Bottom Line: This was a randomized trial examining how the rate of weight loss affects weight regain after dieting.

Finding 1: Rate of Weight Loss Did Not Affect Regain

In both groups, the participants lost similar amounts of body weight, ranging from 18–20 lbs (8–9 kg), on average.

During the 9-month follow-up period, 75% of the participants gained back more than 50% of their lost weight.

This weight regain was similar in both groups, as shown in the chart below. 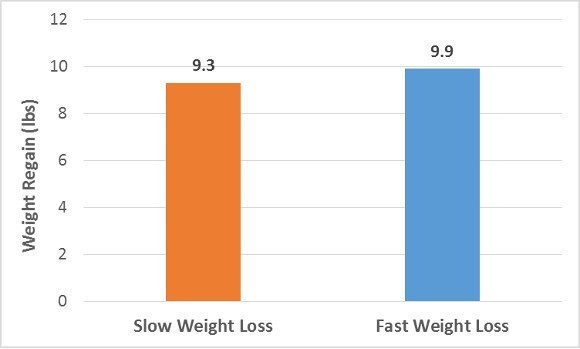 These results are supported by previous studies showing that fast and slow weight loss resulted in similar weight regain.

Bottom Line: The study showed that the rate of weight loss does not affect weight regain after dieting stops.

One of the downsides of dieting is the loss of lean mass, which is a measure of the body’s fat-free mass — muscles, bones and water.

The amount of muscle mass you have is a strong determinant of how many calories your body burns.

The chart below shows the differences between groups, presenting lean mass loss as a percent of total weight loss.

Additionally, loss of lean mass was associated with greater weight regain in both groups. However, this was not enough to cause a significant difference in weight regain between groups.

Bottom Line: Fast weight loss led to a greater lean mass loss, which was significantly associated with weight regain in both groups. However, this was not enough to cause differences in weight regain between groups.

This study was both well designed and implemented, and did not seem to have any serious limitations.

Its main weakness was the method used to assess lean mass, as it did not allow the researchers to distinguish between body water and muscle mass.

In short, this study showed that losing weight fast did not affect weight regain after dieting stopped.

However, fast weight loss had one downside. It caused a greater reduction in lean mass, compared to slower weight loss.

Even though fast weight loss does not affect weight regain, a more gradual weight loss approach is probably a better option, since it may help you retain muscle mass.