Some scientists believe that an imbalance in gut microbiota — the bacteria that live in the gut — may contribute to obesity and metabolic disease.

However, human evidence is limited and mostly based on observational studies.

A recent randomized controlled trial examined the effects of an antibiotic treatment on gut microbiota and metabolism in obese adults.

Below is a detailed summary of their findings. 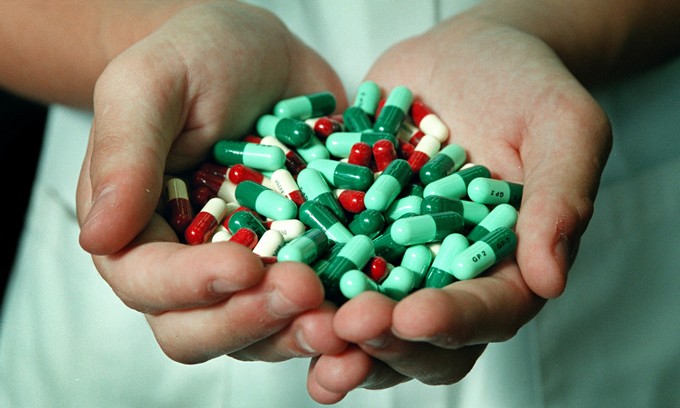 Growing evidence suggests that the bacteria living in your gut may affect your health in a number of ways. They may even play a role in chronic disorders, such as obesity and type 2 diabetes.

Several factors determine what types of bacteria thrive in your gut. These include:

When potentially harmful bacteria overpopulate the gut and beneficial bacteria are lacking, it is often referred to as dysbiosis.

Observational studies and animal experiments have associated dysbiosis with a variety of metabolic disorders, inflammation and obesity. However, evidence from human studies is limited.

Likewise, strong evidence regarding the effects of antibiotics on metabolism in humans is lacking.

This study examined the effects of a 7-day antibiotic treatment on metabolism in overweight and obese men.

This was a randomized controlled trial examining the effects of antibiotics on gut microbiota and metabolism in obese people.

The researchers recruited 57 overweight and obese, pre-diabetic men who were randomly assigned to receive one of two 7-day antibiotic treatments or a placebo:

At the start and end of each 7-day treatment, the researchers measured the following:

Most of the measurements were conducted after a 10-hour, overnight fast.

To find out if the any of the effects were sustained in the long-term, the researchers measured calorie expenditure, fat cell size and insulin sensitivity two months after the antibiotic treatment ended.

Bottom Line: This was a 7-day randomized controlled trial examining the effects of two antibiotics — amoxicillin and vancomycin — on various metabolic factors in obese, prediabetic men.

The study showed that using vancomycin significantly decreased bacterial diversity, compared to a placebo. In contrast, amoxicillin had no significant effects.

Vancomycin had the strongest effects on bacteria in the Firmicutes group, which is involved in short-chain fatty acid formation and the metabolism of bile acids.

Other groups of bacteria increased in abundance, including the vancomycin-resistantLactobacillus plantarum and Enterococcus.

Similar changes have been observed in previous studies examining the effects of antibiotics on gut microbiota.

The present study showed that many of these changes in the gut microbiota were sustained for at least 2 months after the antibiotic treatment ended.

In healthy people, insulin tells the body to clear sugar from the blood. In people with poor blood sugar control, such as diabetics, the body’s cells do not respond efficiently to insulin and blood sugar levels tend to remain high after a meal.

This phenomenon is known as insulin resistance or low insulin sensitivity.

This study showed that a 7-day antibiotic treatment did not affect insulin sensitivity.

These results are supported by a previous study in lean men showing that a broad-spectrum antibiotic treatment did not affect blood sugar control (6).

However, the findings contrast one study in obese people showing that vancomycin reduced insulin sensitivity by 4% in some of the participants. However, the decrease was modest, and the study didn’t include a control group (4).

Bottom Line: An antibiotic treatment with vancomycin or amoxicillin did not affect insulin sensitivity.

The antibiotic treatment did not affect calorie expenditure, fat oxidation or carb oxidation after a mixed, high-fat meal.

Additionally, body weight and fat cell size remained unchanged during the antibiotic treatment and for the duration of the 2-month follow-up period.

In contrast, previous animal studies show that gut microbiota may play a role in calorie absorption and body weight (7, 8).

The antibiotic dose might need to be higher or the treatment length longer to significantly affect body weight or calorie expenditure.

However, the current study strongly suggests that a short-term, 7-day antibiotic treatment with amoxicillin or vancomycin has no such effects.

The circulating levels of these markers were unchanged during the antibiotic treatment.

Yet, there was a significant increase in the number of bacteria (Proteobacteria) that may potentially increase inflammation.

Bottom Line: A short-term antibiotic treatment did not affect the circulating levels of the inflammatory markers IL-6, IL-8 and TNF-α.

Intestinal permeability is a function of the gut wall, allowing nutrients to pass across the gut barrier and into the blood circulation.

When the gut wall is inflamed or weakened, intestinal permeability may be greater than usual. This may allow potentially harmful compounds to “leak” into the blood and cause systemic inflammation.

In fact, intestinal permeability is often assessed by measuring the circulating levels of endotoxins, which originate in the membranes of gram-negative gut bacteria.

This study showed that a 7-day antibiotic treatment with amoxicillin or vancomycin did not affect circulating endotoxin levels, suggesting that it doesn’t affect intestinal permeability.

The liver plays an important role in digestion.

Not only does it store and process nutrients after they have been absorbed, it also produces bile – a liquid that’s essential in the digestion of fat.

Bile works by breaking fat into tiny droplets, known as micelles, allowing it to be absorbed into the bloodstream.

The bile is mainly composed of water and bile acids (bile salts). Most of the bile acids that enter the digestive tract are recycled, meaning they are absorbed and transported back to the liver and used to produce more bile.

A fraction of the bile acids pass down to the colon where they are changed (dehydroxylated by bacterial enzymes) into secondary bile acids (SBAs). SBAs are either absorbed or excreted in the feces.

High levels of SBAs are associated with high fat intake and have been implicated in the development of colon cancer.

The present study showed that vancomycin treatment reduced the levels of SBAs in feces and blood. This was accompanied by reductions in several groups of bacteria that are responsible for producing SBAs.

The health relevance of these findings is unclear.

Bottom Line: Vancomycin treatment reduced the levels of secondary bile acids, which have been associated with an increased risk of colon cancer.

SCFAs are believed to have many health benefits. They nourish the cells lining the colon, may reduce appetite and food intake and have been associated with a reduced risk of colon cancer.

Vancomycin led to a decrease in these SCFA-producing bacteria. Accordingly, levels of butyrate and acetate were significantly lower in the fecal samples of those who were treated with vancomycin, while amoxicillin had no effects.

Similarly, circulating levels of butyrate tended to decrease in response to a vancomycin treatment.

Bottom Line: Treatment with vancomycin, but not amoxicillin, significantly reduced the formation of short-chain fatty acids – butyrate and acetate – in the colon.

Although the study’s design appears to be excellent, the findings cannot be generalized to all antibiotics or treatments.

Additionally, a longer antibiotic treatment could have given different results, and the findings do not necessarily apply to women or lean, healthy men.

This study showed that a 7-day antibiotic treatment with vancomycin caused significant changes in gut microbiota, while amoxicillin had no significant effects.

Vancomycin also significantly reduced levels of short-chain fatty acids and secondary bile acids in the colon, but the health relevance of these changes is unclear.

However, before we can make strong conclusions about the health effects of antibiotics, longer studies testing different doses and types of antibiotics are needed.