Not only does protein increase the amount of calories burned, it also seems to reduce calorie intake by suppressing appetite.

The ketogenic diet is usually much higher in protein than the normal Western diet. As a result, it may help people lose weight.

However, it is unclear if the weight-loss benefits of the ketogenic diet are merely due to increased protein intake, or if it improves body composition and calorie expenditure irrespective of its protein content.

For this reason, a recent study examined the changes in calorie expenditure and weight loss when switching from a high-carb diet to a low-carb, high-fat (ketogenic) diet, while keeping protein intake constant.

Below is a detailed summary of its findings as well as some background information.

The rates of obesity have been rising in the past decades.

Multiple aspects of the modern lifestyle contribute to obesity. For example, physical activity has decreased and the consumption of sugar and processed junk food has been on the rise.

Eating excessive amounts of sugar is linked with an increased risk of obesity. However, since sugar contains no more calories than protein or complex carbs, gram for gram, it is still not entirely clear how it promotes weight gain.

One popular idea is that sugar is addictive for some people, increasing cravings and calorie intake. Although the hypothesis is not yet fully proved, it is supported by several lines of evidence.

Another idea is the carbohydrate-insulin hypothesis of obesity. It posits that obesity is mainly caused by elevated insulin levels.

According to this hypothesis, elevated insulin levels suppress the use of fat for fuel, promoting its storage in fat tissue.

Additionally, scientists have speculated that “locking” fat in fat cells (decreasing its availability as fuel) might cause a state of starvation, leading to an adaptive decrease in calorie expenditure and an increase in calorie intake.

This study examined the effects of an extremely low-carb diet (ketogenic diet) on calorie expenditure and body composition in obese men.

Energy expenditure and body composition changes after an isocaloric ketogenic diet in overweight and obese men.

This 2-month study examined how switching from a high-carb diet to a low-carb, high-fat diet changes calorie expenditure and body composition.

Seventeen 18-50 years old overweight and obese men, with a body mass index ranging from 25-35, participated in the study.

The study was divided into two, successive, 4-week periods:

Throughout the study, the participants were confined to a metabolic ward. Their food intake was closely monitored and all food was prepared by the study kitchen. Both diets contained minimal amounts of processed food and added sugar.

Additionally, the researchers adjusted the participants’ calorie intake so that they would be in neutral energy balance, maintaining their body weight.

Since eating higher amounts of dietary protein may increase calorie expenditure, protein intake was kept constant at 15% of total calories throughout the study.

Every week, the participants spent two days inside a metabolic chamber, and the researchers measured the following:

Bottom Line: The study tested the effects of a low-carb, high-fat, ketogenic diet on calorie expenditure and body composition in overweight and obese men.

The study was designed so that the participants would maintain their weight.

However, as the study progressed the researchers discovered that the participants burned more calories than predicted. The most likely explanation is that the participants were more active when outside the metabolic chamber. This was confirmed by a 21% increase in hip accelerometer counts.

This means that the participants were underfed during the study, resulting in weight loss. Overall, the negative energy balance corresponded to roughly 300 calories every day.

The chart below shows how total body weight changed during the course of the study. The weight is presented as the difference from the start of the ketogenic diet (denoted as 0 on the horizonal axis). 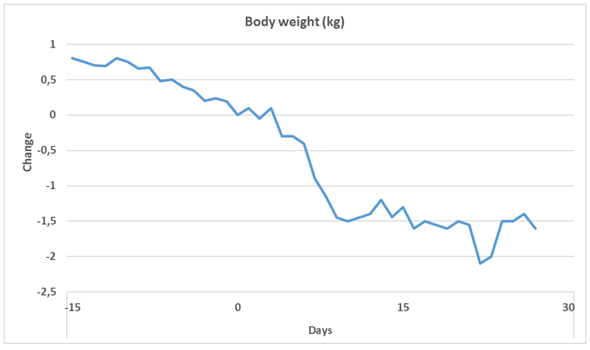 When starting the ketogenic diet, there was a sudden drop in body weight (-3.5 lbs or -1.6 kg), likely caused by loss of water. Body weight then stabilized for the remainder of the study.

The researchers also measured changes in fat mass, using DEXA. Interestingly, the loss of fat mass slowed when the participants switched from the high-carb diet to the low-carb, ketogenic diet.

Bottom Line: Switching to a ketogenic diet after being on a high-carb diet did not increase fat loss. On the contrary, it slowed down body fat loss.

Going on the ketogenic diet caused a slight increase in calorie expenditure. This amounted to approximately 100 calories per day.

Sleeping metabolic rate – calories burned while sleeping – was largely responsible for this increase. However, the increase was only temporary and calorie expenditure gradually returned to initial levels.

Additionally, body composition adjustments likely overestimated the increase in calorie expenditure because most of the weight loss was probably caused by loss of water.

In fact, previous studies suggest that eating less carbs does not increase the amount of calories burned, unless accompanied by an increase in protein intake (1, 2).

Other studies have reported a small decrease in calorie expenditure on low-carb diet or no statistically significant change at all (3, 4, 5, 6, 7).

Simply put, the ketogenic diet didn’t cause a significant or physiologically relevant increase in calorie expenditure, compared to a high-carb diet, when protein intake was kept constant.

Every week, the researchers assessed protein use by the body. This was done by measuring the levels of nitrogen in the urine over a 24 hour period.

Interestingly, the levels of nitrogen in urine increased by 1.5 grams/day, on average, during the ketogenic diet, as shown in the chart below. 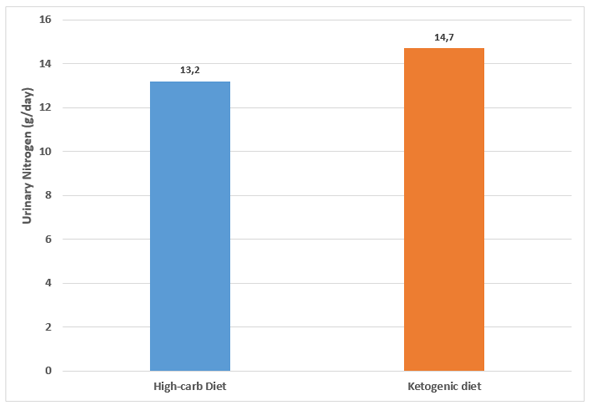 This indicates that the body was using greater amounts of protein. However, this increase was highest during the first week on the ketogenic diet, but then gradually returned to initial levels.

Supporting this, previous research shows that insulin reduces the protein breakdown (proteolysis) in the body.

Daily insulin secretion, which is the total amount of insulin formed over one day, was assessed by measuring the levels of C-peptide in urine.

When the participants switched over to the ketogenic diet, their daily secretion of insulin dropped by approximately 47%.

These findings are presented in the chart below. 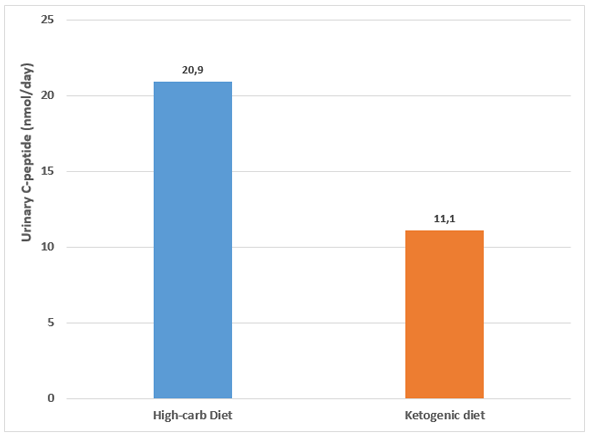 The main limitation of the study was the unintentional weight loss. The study was designed to keep the participants weight-stable, but instead they lost weight.

This was likely explained by greater physical activity when the participants were outside the metabolic chambers. A similar effect was seen in a previous study (8).

Second, the present study didn’t include a control group of participants that didn’t go on a ketogenic diet. For this reason, the study doesn’t definitely prove that all of the observed changes were caused by the ketogenic diet, although highly likely.

Third, the study included only overweight and mildly obese men. The findings do not necessarily apply to women or people who are normal-weight or severely obese.

Finally, some critics have pointed out that the fat composition of the ketogenic diet might make a difference. The possible effects of fat type on calorie expenditure need to be studied further.

Bottom Line: This study had an excellent design. However, the study lacked a control group and the participants failed to maintain their body weight.

Simply put, this study suggests that going on a high-fat (ketogenic) diet, after being on a high-carb diet, caused a slight increase in calorie expenditure.

However, calorie expenditure gradually returned to base levels. Additionally, it did not lead to an increase in fat loss. On the contrary, fat loss appeared to slow down during the ketogenic diet.

This means that going on a very low-carb diet without increasing your protein intake probably doesn’t cause any relevant changes in the amount of calories you burn.

These findings undermine the carbohydrate-insulin hypothesis of obesity. On the other hand, ketogenic diets might promote weight loss by decreasing appetite and calorie intake.

Ketogenic diets are also associated with various other health benefits. Yet, they are hard to stick to in the long term and may not be for everyone.