In many ways, the human body is like a well-oiled machine. It should run smoothly and with regularity.

However, some unhealthy lifestyle habits, such as poor sleep and irregular eating patterns, may disrupt its natural rhythms.

A recent study compared the effects of regular and irregular eating habits on metabolism — blood sugar control, calorie expenditure and appetite. Below is a detailed summary of its findings.

In developed societies, food is always available, and acquiring it doesn’t require hard work or preparation. As a result, most people can chose when they eat and how much.

When food is easy to acquire, people who have difficulty controlling their food intake tend to overeat and gain weight. They also snack more often and eat irregularly.

For this reason, some observational studies have associated irregular eating patterns with an increased risk of obesity and metabolic disease (1, 2, 3).

However, growing evidence from controlled studies suggests that irregular eating patterns may affect metabolism irrespective of calorie content. For example, eating irregularly may:

These adverse effects of meal irregularity may have something to do with the body’s time keeping system.

Irregular breakfast habits may be one sign of an overall irregular meal pattern.

Most controlled studies suggest that skipping breakfast or eating most of your daily calories late in the day, may promote weight gain and metabolic disease, although not all studies agree (4, 5, 6, 7, 8).

This study examined the effects of irregular meal patterns on carb metabolism, the thermic effect of food, blood lipids, gut hormones and appetite.

They were assigned to two 14-day treatment periods in a random order:

The study had a crossover design, which means that all participants were assigned to both treatments in a random order, separated by a 14-day washout period.

During both treatment periods, the participants were asked to consume meals at specific times of the day between 8 AM and 9 PM to ensure either the regularity or irregularity of the meal pattern.

They also followed a standardized weight-maintenance diet, providing roughly 50% of total calories from carbs, 35% from fat and 15% from protein.

Before and after each treatment period, the researchers measured calorie expenditure and took blood samples.

All blood samples were taken in the morning after a 12-hour overnight fast and again several times following a test drink.

Blood sugar was also continuously monitored for 3 successive days during each treatment period.

Additionally, the participants were asked to rate their appetite on a visual analog scale (VAS) before and after a pasta-based test meal on days 7 and 14 of each treatment period.

After you eat there’s a temporary increase in the amount of calories you burn. This rise in calorie expenditure is known as the thermic effect of food (TEF) or diet-induced thermogenesis.

The study showed that TEF increased significantly during the regular meal pattern intervention. 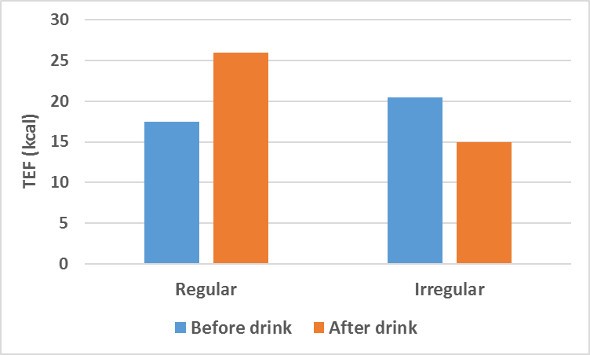 These findings are supported by previous studies showing that meal irregularity leads to decreases in the TEF ( 4, 5).

Bottom Line: Eating irregularly reduced the thermic effect of food, an effect that might promote weight gain in the long-term. 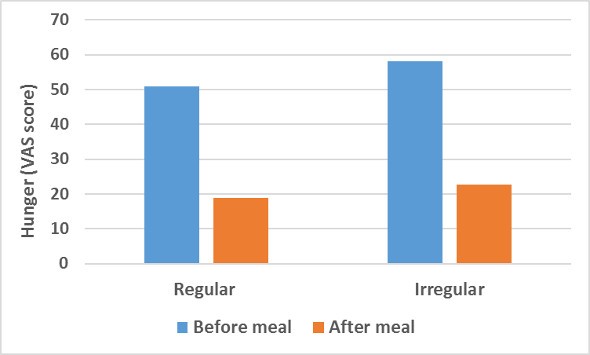 Despite these increases in hunger, calorie intake during the test meal remained unchanged.

Since the participants were on a weight-maintenance diet and the study period was short, the researchers observed no significant changes in body weight.

Bottom Line: Eating irregularly increased subjective ratings of hunger. However, these changes in appetite did not significantly increase calorie intake at a test meal.

Finding 3: Eating Irregularly Reduced Levels of PYY After a Meal

Peptide YY (PYY) is a hormone that reduces appetite. Its levels increase after you eat and decrease during fasting.

This study showed that the mean levels of PYY decreased after both treatments. However, this decrease was greater after eating irregularly for 2 weeks.

Given that PYY may reduce appetite, the irregular eating pattern should have increased appetite or hunger. This is consistent with the results for self-reported appetite.

No other significant differences in blood sugar levels or insulin were detected.

These findings are consistent with other studies showing that irregular eating habits may impair blood sugar control (9).

This well-designed study didn’t seem to have many faults.

However, the study was relatively short. Further studies are needed to examine the long-term effects of irregular eating patterns.

Taken together, these changes suggest that irregular eating may lead to weight gain and metabolic imbalances over time. However, the study was too short to detect any significant changes in body weight.

Simply put, eating regularly at specific times of the day (without overeating) and avoiding snacking between meals is probably good for your health and waistline.