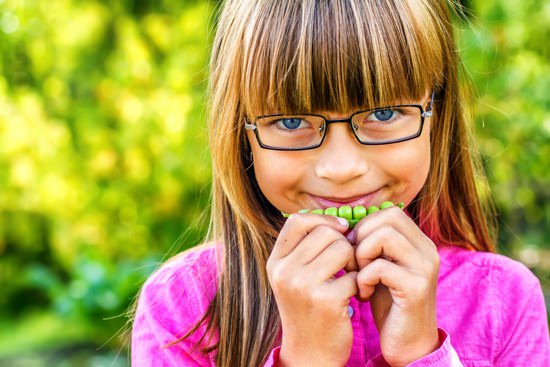 This week we reviewed two research articles, both published in the American Journal of Clinical Nutrition.

Summary: This was a randomized controlled trial examining the effects of a diet low in glycotoxins (advanced glycation end products) on insulin sensitivity.

The study suggested that eating a diet low in glycotoxins may improve insulin sensitivity, potentially reducing the risk of type 2 diabetes.

Summary: This was a systematic review and meta-analysis of randomized controlled trials examining the effects of pulses, the seeds of legumes, on body weight.

The analysis showed that eating pulses may promote a slight weight loss, even if the diet is not calorie-reduced.

Lots of new papers came to our attention this week. Here are summaries of the most interesting or relevant studies, categorized by subject.

Changes in hunger and fullness in relation to gut peptides before and after 8 weeks of alternate day fasting.

Alternate day fasting (ADF) is a type of intermittent fasting. One version of ADF is characterized by a 75% calorie restriction every second day. This study examined the effects of an 8-week ADF on body weight and appetite ratings in 59 obese people.

Associations between dietary energy density and obesity: a systematic review and meta-analysis of observational studies.

Energy density refers to how many calories one gram of a food provides. Energy-dense foods include those that are high in fat and low in water and fiber.

This review and meta-analysis of observational studies suggests that eating energy-dense foods is linked with weight gain and an increased risk of obesity over time.

Free Sugars and Total Fat Are Important Characteristics of a Dietary Pattern Associated with Adiposity across Childhood and Adolescence.

This observational study suggests that a diet high in both fat and sugar is linked with a higher risk of weight gain and obesity among children and adolescents.

This randomized, crossover study showed that using salt to improve the taste of food increased calorie intake during test meals by 11%. This suggests that salting food may promote overeating.

Conversely, there was no effect of fat content on the amount of food eaten. However, a high-fat test meal increased calorie intake by 60%, compared to a lower-fat meal.

Effects of Supplementation with Curcumin on Serum Adipokine Concentrations: A Randomized Controlled Trial.

Previous studies suggest that high levels of the hormone adiponectin may protect against insulin resistance in mice. Additionally, evidence suggests that curcumin — an active compound found in turmeric — may increase adiponectin levels.

Intake of Total Polyphenols and Some Classes of Polyphenols Is Inversely Associated with Diabetes in Elderly People at High Cardiovascular Disease Risk.

This observational study in elderly people at a high risk of heart disease indicates that eating a lot of foods rich in polyphenol antioxidants, such as whole grains, fruit and vegetables, may reduce the risk of type 2 diabetes.

Protective Effects of the Mediterranean Diet on Type 2 Diabetes and Metabolic Syndrome.

This review of clinical trials and observational studies concluded that adhering to the Mediterranean diet may help prevent metabolic syndrome and type 2 diabetes.

According to previous studies, coffee or caffeine consumption may increase blood pressure for at least a few hours afterwards, regardless of fasting blood pressure.

This observational study in older Spanish individuals with high blood pressure (hypertension) found that 24-hour blood pressure was higher among those who consumed three or more cups of coffee per day.

Short-Term Vitamin B-6 Restriction Does Not Affect Plasma Concentrations of Hydrogen Sulfide Biomarkers Lanthionine and Homolanthionine in Healthy Men and Women.

Hydrogen sulfide is a type of gas produced in tiny amounts by cells in the lining of blood vessels. It causes the blood vessels to dilate and widen, lowering blood pressure and potentially reducing the risk of heart disease.

Beta-glucan (BC) is a cholesterol-lowering, soluble fiber found in cereals and mushrooms. Its ability to lower cholesterol may be related to its viscosity. Certain types of BC, such as high-molecular-weight (HMW) BC are very viscous.

This 5-week, randomized controlled trial in adults with elevated cholesterol levels showed that eating 3 grams of HMW-BC per day reduced cholesterol more than low-molecular-weight (LMW) BC. In fact, LMW-BC had no effects on cholesterol.

Combined effect of diet and cervical microbiome on the risk of cervical intraepithelial neoplasia.

Intraepithelial neoplasia (IN) is an abnormal growth on the surface of the cervix in the lower part of the uterus. It’s not cancer, but may develop into cancer if left untreated.

This observational study suggests that a diet characterized by a higher intake of bread, fat and soft drinks may increase the risk of IN, compared to a higher intake of vegetables and fish. The uterine microbiota also appeared to play a role.

The Dietary Inflammatory Index Is Associated with Prostate Cancer Risk in French Middle-Aged Adults in a Prospective Study.

This observational study suggests that pro-inflammatory diets, ranking high on the DII, may increase the risk of prostate cancer. What’s more, they may increase breast cancer risk in those who drink low to moderate amounts of alcohol.

Menarche is the first menstrual cycle in girls. It can happen as early as age 9, but is most common between the ages of 11 and 14. Previous studies have linked an early menarche with an increased risk of breast cancer later in life.

Raw Garlic Consumption and Lung Cancer in a Chinese Population.

This observational study in Chinese people suggests that eating raw garlic may reduce the risk of lung cancer.

Coffee Consumption and the Risk of Colorectal Cancer.

This observational study indicates that drinking coffee regularly may reduce the risk of colorectal cancer.

The Omega-3 Index Is Inversely Associated with Depressive Symptoms among Individuals with Elevated Oxidative Stress Biomarkers.

This observational study in Puerto Ricans suggests that a high intake of omega-3 fats may reduce symptoms of depression among those who have high levels of oxidative stress. Others may not benefit as much.

An Increase in Plasma Homovanillic Acid with Cocoa Extract Consumption Is Associated with the Alleviation of Depressive Symptoms in Overweight or Obese Adults on an Energy Restricted Diet in a Randomized Controlled Trial.

This 4-week, randomized controlled trial showed that supplementing with 1.4 grams of cocoa extract per day (containing 645 mg of antioxidant polyphenols), did not significantly reduce depression symptoms.

Yet it did increase circulating levels of homovanillic acid, which was associated with reduced depressive symptoms. The relevance of this observation is unclear.

Coffee and tea consumption in relation with non-alcoholic fatty liver and metabolic syndrome: A systematic review and meta-analysis of observational studies.

Non-alcoholic fatty liver disease (NAFLD) is characterized by an accumulation of fat in the liver. It is associated with metabolic syndrome. If untreated, it may damage the liver over time, leading to a serious condition known as cirrhosis.

This review and meta-analysis of observational studies indicates that drinking coffee regularly may protect against the development of cirrhosis in NAFLD patients.

Supplementation with α-Lipoic Acid Alone or in Combination with Eicosapentaenoic Acid Modulates the Inflammatory Status of Healthy Overweight or Obese Women Consuming an Energy-Restricted Diet.

Alpha-lipoic acid (ALA) is an organosulfur compound found in small amounts in almost all food, especially in organ meats, spinach and broccoli. It is also produced in our bodies where it serves important functions in energy metabolism.

This randomized controlled trial showed that supplementing with ALA — 0.3 grams per day while on a 10-week calorie-restricted diet — improved several inflammatory markers, such as C-reactive protein. It also improved some heart disease markers.

Prepregnancy Low to Moderate Alcohol Intake Is Not Associated with Risk of Spontaneous Abortion or Stillbirth.

This observational study suggests that low or moderate alcohol intake before pregnancy does not increase the risk of miscarriage or stillbirth.

10. Vitamins, Minerals and Other Nutrients

For older men, the current estimated average requirement (EAR) for protein is 1.5 g/lb (0.66 g/kg) of body weight per day, while the RDA is 1.7 g/lb (0.8 g/kg). These values were calculated using nitrogen balance data.

Studies using the amino acid oxidation technique (IAAO) indicate that those values may be too low. Confirming their findings, the current study showed that the EAR/RDA for protein among older men may be underestimated by 30%.