Docosahexaenoic acid (DHA) and Eicosapentaenoic acid (EPA) are long-chain omega-3 fatty acids that are well known for their health benefits.

Both are found in fatty fish, as well as fish oil supplements. Most research has examined their combined health effects, but few studies have compared them.

Recently, a large Canadian study compared the effects of DHA and EPA on inflammatory markers and blood lipids.

Here is a detailed summary of its findings.

Many scientists believe that chronic, low-grade inflammation is a key factor in the development of lifestyle diseases, such as heart disease.

Several unhealthy lifestyle habits contribute to inflammation. One of them is the excessive consumption of omega-6 oils, relative to omega-3.

Excessive omega-6 intake is a consequence of the modern, processed diet. If you eat a lot of processed food and vegetable oils — mainly soybean, sunflower or corn oil — you are almost certainly getting too much omega-6.

Both EPA and DHA are found in seafood, fatty fish, fish oil and certain types of marine microalgae.

The body can also produce them from alpha-linolenic acid (ALA), which is found in many plant oils. However, the conversion of ALA to EPA and DHA is inefficient. It’s best to get EPA and DHA from your diet or supplements, rather than relying on ALA.

Few studies have compared the anti-inflammatory potential of EPA and DHA. Most have investigated mixtures of EPA and DHA or included only one of them (1).

Some studies suggest that Docosahexaenoic acid (DHA) may be more effective at improving the blood lipid profile, but little is known about their individual effects on inflammation (2).

This study compared the effects of EPA or DHA supplementation on inflammatory markers and blood lipids.

Randomized, crossover, head-to-head comparison of EPA and DHA supplementation to reduce inﬂammation markers in men and women: the Comparing EPA to DHA Study.

This was a double-blind, randomized controlled trial examining the effects of supplementing with EPA or DHA on markers of inflammation in healthy men and women.

The study recruited 48 men and 106 women with abdominal obesity and low-grade chronic inflammation.

They were randomly assigned to three groups:

The study had a crossover design, which means that the participants were assigned to all three treatments in a random order. Each treatment period was separated by a 9-week washout period.

During the study, the participants were asked to exclude all major sources of omega-3 from their diet.

At the start and end of each study period, the researchers measured the following:

Bottom Line: This was a randomized controlled trial comparing the effects of the omega-3 fats DHA and EPA on inflammatory markers and blood lipids.

Supplementing with DHA caused a significantly greater reduction in inflammatory markers than EPA.

Specifically, DHA and EPA supplementation had the following effects, compared to the control (corn oil):

These findings are presented in the charts below: 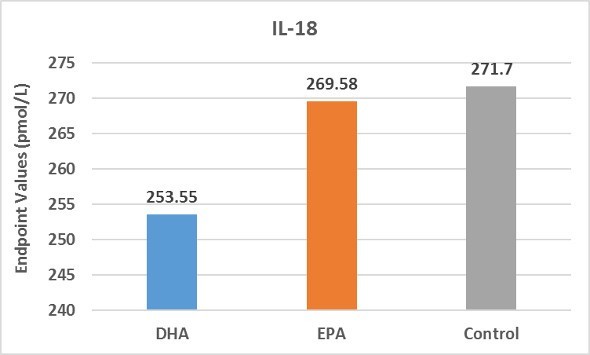 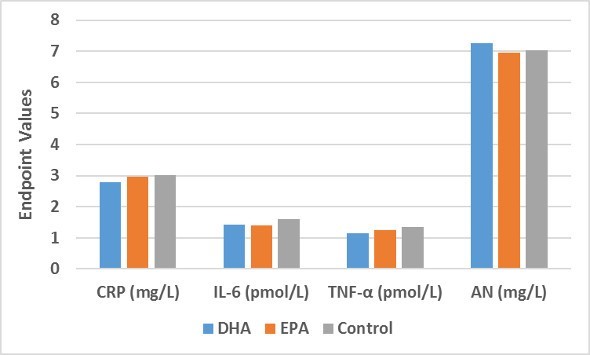 However, those studies recruited only 25 or fewer participants for each group and had far less statistical power than the present study.

Bottom Line: Supplementing with DHA had a stronger anti-inflammatory effect than EPA.

These findings are presented in the chart below:

The results are consistent with the findings of a previous meta-analysis showing that supplementing with DHA leads to a greater decrease in triglycerides and greater increases in LDL and HDL-cholesterol, compared to EPA.

Docosahexaenoic acid (DHA) supplementation led to changes in triglycerides, apoB and LDL-cholesterol, which may suggest an increase in LDL particle size (a good change). However, future studies are needed to confirm this finding using proper measurements.

The study had an excellent design and few methodological issues. However, the authors pointed out some minor limitations.

Circulating levels of DHA and EPA weren’t measured at the beginning of each study period. For this reason, it is unclear if the washout between treatment periods was long enough to eliminate all effects from the previous treatment period.

However, the levels of blood lipids and inflammatory markers were similar at the start of each of the periods, indicating that there were no residual effects from the previous treatment period.

In short, supplementing with 2.7 grams of Docosahexaenoic acid (DHA) for 10 weeks was more effective than a similar dose of EPA at decreasing markers of chronic inflammation and improving the blood lipid profile in men and women with excessive belly fat.

However, more research is needed before we can claim that DHA is healthier than EPA. In fact, a recent study concluded that EPA may have greater benefits when it comes to heart disease prevention.

For the time being, it may be best to eat fatty fish, which provides both DHA and EPA, or choose mixed long-chain omega-3 supplements.