Many people think drinking diet beverages is a great way to lose weight.

However, most dietary recommendations say pure water is best. Recently, a team of scientists from Iran and the UK delved into this issue.

Here is a detailed summary of the results, recently published in the American Journal of Clinical Nutrition. 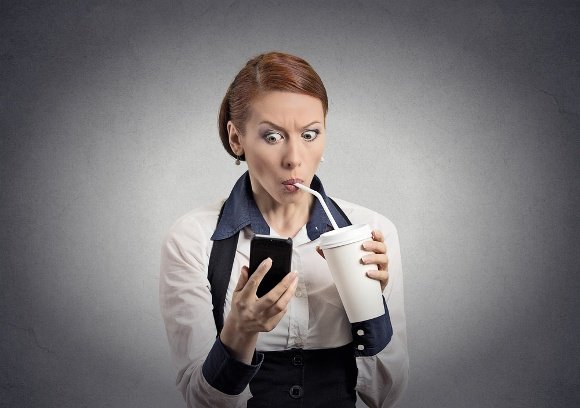 Sugar-sweetened beverages have long been linked to weight gain.

For this reason, beverages with low-calorie sweeteners have become a popular alternative for those who wish to maintain or lose weight.

Although the evidence is mixed, some studies actually suggest that diet beverages may be associated with weight gain as well.

A group of researchers from Iran and the UK compared the effectiveness of diet beverages and water on weight loss.

Effects on weight loss in adults of replacing diet beverages with water during a hypoenergetic diet: a randomized, 24-wk clinical trial.

This was a 24-week, randomized weight loss trial in 62 healthy, overweight and obese women. The participants ranged in age from 18 to 50 years.

Before the study started, all of the participants regularly consumed diet beverages.

However, it is important to note that the contents of the diet beverage are not specified.

This study was designed to promote weight loss of 7–10%, during the research period. This involved a calorie-restricted diet that was high in carbs (60%), but low in fat (23%) and protein (17%).

Additionally, participants had professional support throughout the study, and were encouraged to gradually increase physical activity to 60 minutes, 5 days of the week.

The researchers measured body weight, insulin, blood sugar and blood lipids at the beginning, middle and end of the study.

Bottom Line: This was a randomized weight-loss trial in overweight and obese women. It compared the effectiveness of drinking diet beverages or replacing them with water.

Participants in both groups achieved significant weight loss during the study.

However, drinking pure water resulted in a 13.6% greater weight loss than diet beverages. However, the difference was small, amounting to 2.6 pounds, or 1.2 kg.

The chart below shows the difference in weight loss and body mass index (BMI) between groups. 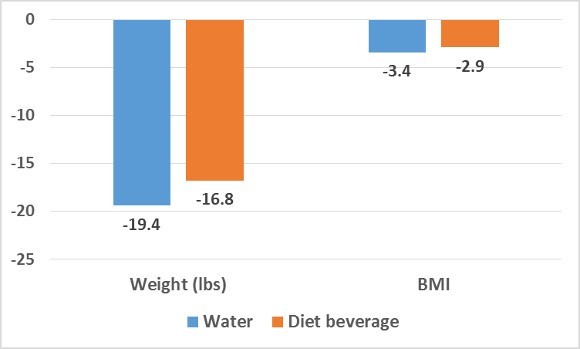 In general, these results are supported by studies showing that increased water intake can help with weight loss.

However, there are mixed results in studies that compared water and diet beverages. For example, one randomized controlled trial found that diet beverages caused significantly greater weight loss, compared to water.

Another trial found that weight loss was similar among those who drank water or diet beverages (7).

The cause of these inconsistencies is unknown, but they might be due to differences in the type of diet beverage or a lack of compliance.

Despite these disparities, the present study is significant because it is different from previous trials.

This study is the first to examine the effectiveness of replacing diet beverages with water, during a weight loss program, where participants were obese, regular drinkers of diet beverages.

Bottom Line: The study showed that replacing diet beverages with water led to greater weight loss. However, other studies have found no difference, and some have even found diet beverages to lead to more weight loss than water.

The chart below shows the improvements in insulin and blood sugar levels 2 hours (2-hbs) after eating 75 grams of glucose. 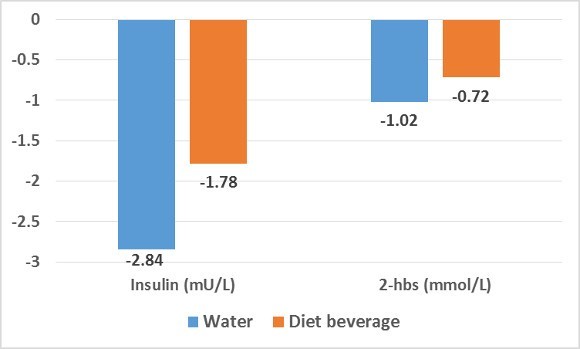 Additionally, although fasting blood sugar levels improved overall, the difference between groups was not statistically significant.

The weight loss program caused substantial improvements in blood lipids in both groups.

The chart below shows the changes in both groups. 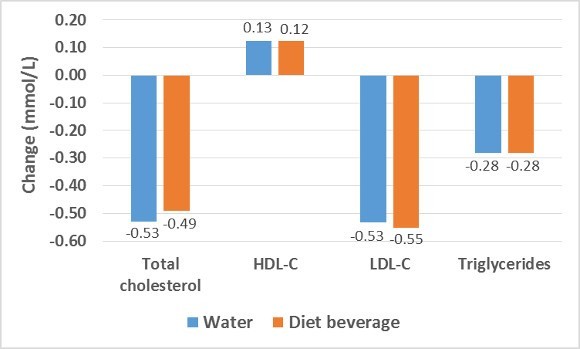 These improvements were not significantly different between groups.

Bottom Line: The blood lipid profile improved in both groups. However, there was no significant difference between groups. In general, this indicates that water and diet beverages may have similar effects on blood lipids.

The study appears to have been well designed and executed.

However, the paper itself has one major limitation. It fails to provide information about the contents of the diet beverage used in the study, which makes interpreting the results difficult.

There are many different artificial sweeteners in the food supply. Different types may have different effects.

This may explain some of the differences between groups.

Bottom Line: The study appears to have been designed well. However, the paper fails to specify the contents of the diet beverage, which makes interpreting the results difficult.

However, it is impossible to reach any conclusions based on this study alone, because other studies have shown completely different effects.

At the end of the day, this may depend on the individual.

If you like diet drinks, and they help you stick to a healthy diet, then there is probably no need to stop drinking them.

But if you are drinking them, and you have trouble losing weight or want to speed things up, removing these drinks may or may not help.

It’s definitely something that is worth experimenting with, but the science is not settled on this issue yet.