On its own, fat tastes rather bland and people are unlikely to binge on it. However, mixing it with savory flavors, sugar or salt can make it very tasty.

Recently, a team of scientists examined how fat and salt affect calorie and food intake. Below is a detailed summary of their results.

Most people know that eating too much fat promotes weight gain and obesity.

This is because, gram for gram, fat is very rich in calories. Additionally, its appetite-suppressing effects are relatively weak.

A team of Australian researchers examined the effects of fat and salt on food intake.

This randomized, crossover trial examined the effects of fat and salt on food intake.

It also investigated how fat taste sensitivity affects appetite after meals, and whether this was influenced by salt intake.

48 healthy men and women participated in the four test days of the study.

Each day, all participants had a standardized breakfast consisting of plain mini-croissants, after which they were assigned to four lunch meals in a random order.

These lunch meals all consisted of 56% cooked elbow macaroni with 44% Coles home-brand sauce (based on tomato passata) and a jug of water.

The total amount of macaroni and sauce was 1,350 grams and the participants were allowed eat as much as they wanted, or until they were comfortably full.

Depending on the lunch meal, the sauce provided different amounts of fat and salt, as shown below:

All four meals contained approximately the same amount of protein and carbs.

The low-salt sauces contained no added salt. The high-salt sauce had optimally pleasant saltiness, based on the results of previous studies.

Since the trial had a crossover design, the participants consumed all of the above lunch meals on different occasions, separated by one week.

Before and after each lunch meal, the researchers measured food intake, calorie intake and subjective ratings of appetite.

On two occasions, fat taste sensitivity was also estimated by determining the minimum amount of oleic acid — a common unsaturated fat — the participants were able to taste.

Bottom Line: This was a randomized, crossover trial examining the effects of salt and fat on food and calorie intake.

Salt increased both food and calorie intake by 11%, regardless of the amount of fat in the meals. These findings are shown in the chart below: 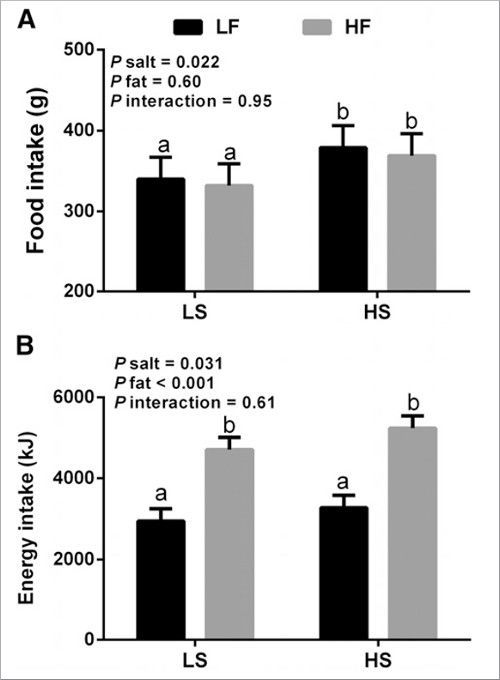 Bottom Line: Saltiness increased food and calorie intake by 11%, regardless of the amount of fat. This was probably because salting made the food taste better.

Those participants who were sensitive to the taste of fat tended to eat less of it.

However, the study showed that fat intake was only reduced when the lunch meal contained low amounts of salt.

These findings suggest that people who are sensitive to the taste of fat are less likely to overeat on a high-fat diet, but that high amounts of salt may override this reduction in appetite. This is supported by previous studies.

Bottom Line: High fat taste sensitivity was associated with a lower consumption of fat. However, salt seemed to override this reduction.

Overall, fat had no significant effects on the amount of food eaten during the meals.

In other words, despite the high calorie content of fat, the participants did not compensate by eating less of it.

In fact, calorie intake was 60% higher during the high-fat meals.

However, women appeared to be slightly less greedy than men when it came to fat. They ate 15% less of the high-fat meals by weight, compared to the low-fat meals.

This study had several limitations.

First, it assessed the effects of only one type of food.

Second, the amount of fat in the high-fat meal was greater than what people normally eat during one meal. However, by using very high-fat meals, the study clearly showed that fat doesn’t have much effect on appetite.

Finally, the study only measured one meal. Further studies need to examine if a high-salt diet has any effects on weight gain and obesity in the long term.

The study showed that salt increased food and calorie intake, regardless of its fat content. This is probably because salt makes food more pleasant or tasty to eat.

Simply put, eating a lot of salty food may promote overeating and weight gain, especially if the food is also high in fat.