Dieting often results in the loss of both fat and muscle mass.

Strength exercises and protein can help prevent the loss of muscle mass, yet studies disagree on how much you need.

A recent study examined these effects. Below is a detailed summary of their results, published in the American Journal of Clinical Nutrition. 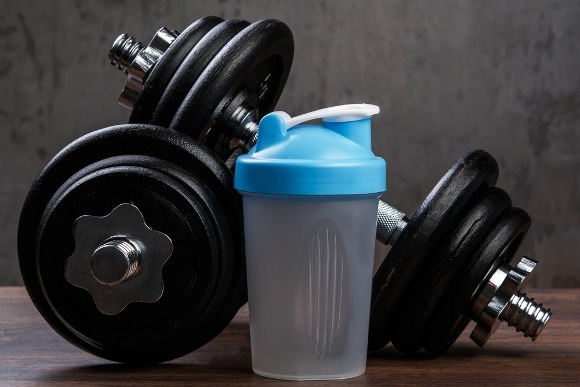 When you are on a calorie-reduced diet, loss of lean body mass may contribute to 20–30% of the total body weight you lose.

Lean body mass, also known as fat-free mass, is a measure of body composition. It is basically all of the body mass — water, bones and muscles — minus the fat.

The loss of lean body mass during dieting is mainly due to loss of muscle, but water may be lost as well.

Maintaining your muscle mass is very important for overall health. Fortunately, several strategies may help, including :

A group of researchers from McMaster University, Canada, examined the effects of high protein intake on body composition during a calorie-reduced diet combined with high-intensity strength exercise.

This 4-week, randomized, controlled trial examined whether the amount of protein eaten on a calorie-reduced diet during an intense strength exercise program would affect changes in body composition.

A total of 40 overweight young men followed a calorie-reduced diet, providing 60% of their calorie requirements, or 33 kcal for every kg (about 2.2 lbs) of lean body mass.

They also had exercise sessions on 6 days of the week, which involved strength training and high-intensity interval training.

The participants were randomly assigned to one of two diet groups:

The amount of protein in the control diet was similar to what many people normally get from their diet. In the high-protein group, however, the protein intake was 3 times higher than the recommended daily allowance.

All food was provided by the study kitchen. Participants in both groups also received beverages containing whey protein.

One of the protein beverages was consumed immediately after exercise, whereas the rest were consumed throughout the day.

At the start and end of the study, the researchers measured body composition.

Bottom Line: This was a 4-week, randomized, controlled trial examining the effects of a high-protein diet on changes in body composition during a calorie-reduced diet combined with strength exercises.

Lean body mass increased significantly in the high-protein group, while it remained unchanged in those who got lower amounts of protein.

The chart below shows the differences between groups. 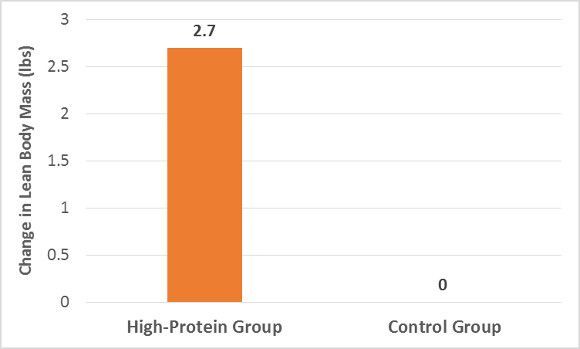 In both groups, lean muscle mass was preserved, despite significant weight loss.

This is supported by a previous study in overweight and obese women showing that a high-protein diet, providing 30% of calories from protein, increased lean mass during a calorie-reduced diet and a strength exercise program.

Participants in both groups lost significant amounts of fat. In fact, the participants’ weight loss was solely fat loss, while lean body mass was preserved.

This fat loss was significantly greater in the high-protein group, compared to the control group, as shown in the chart below. 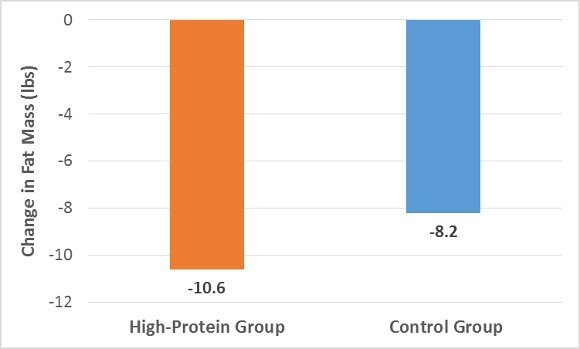 This study was well designed and implemented, and appears to have no obvious limitations.

This study showed that supplementing with protein and doing high-intensity exercise prevented muscle loss and increased fat loss during a calorie-reduced diet.

If you want to improve the effectiveness of your dieting, consider eating more protein and doing some strength exercises.

This can help you retain your muscle mass, increasing the quality of your weight loss and improving your overall health.