Eating a variety of fruits and vegetables has been associated with improved health and a reduced risk of chronic disease.

The current Dietary Guidelines for Americans even recommend them for weight loss.

However, not all fruits and vegetables are equal when it comes to weight loss or maintenance. They may have different metabolic effects, depending on their nutrient composition.

Body weight may be affected by glycemic load and amount of fiber, as well as polyphenols and sugar content. 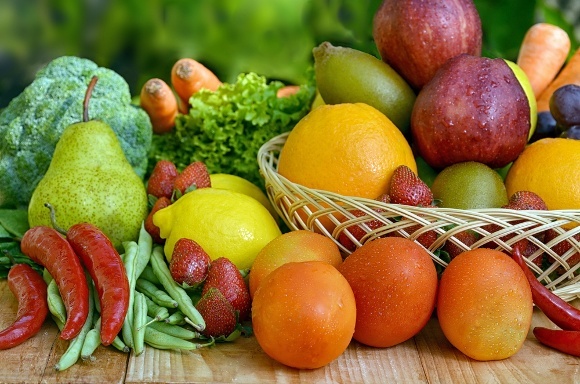 A team of researchers hypothesized that fruits and vegetables with a high fiber content or a low glycemic load would be more strongly associated with weight loss.

To prove or disprove this hypothesis, they did a meta-analysis of three observational studies that spanned up to 24 years.

Bertoia et al. Changes in Intake of Fruits and Vegetables and Weight Change in United States Men and Women Followed for Up to 24 Years: Analysis from Three Prospective Cohort Studies. PLOS Medicine 2015.

The purpose of the study was to investigate the association of increased fruit and vegetable intake and changes in weight over time.

Additionally, the researchers wanted to find out if fiber-rich, low-glycemic fruits and vegetables were more strongly associated with weight loss and weight maintenance than their fiber-poor and high-glycemic counterparts.

The study used a so-called “change-on-change” analysis. In other words, it examined the effect of changes in the consumption fruit and vegetables and compared them with changes in body weight.

A validated food frequency questionnaire was used to assess food intake. It included more than 70 fruits and vegetables.

The foods were classified as either high- or low-fiber, and as high- or low-glycemic, based on their glycemic load. Glycemic load was calculated by multiplying the serving size with the glycemic index of the food.

When analyzing the dietary data, other lifestyle factors and diseases were taken into account. These included other dietary aspects, physical activity, alcohol and smoking status.

Additionally, the calculations were only based on whole foods. Processed foods, such as fruit juice, french fries and potato chips, were excluded.

This chart shows the weight loss for different classes of fruits and vegetables, based on one serving size: 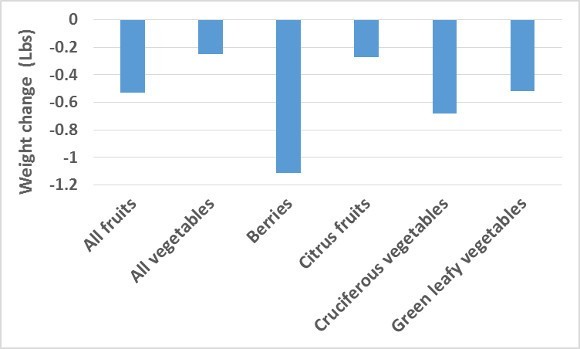 The numbers show the pooled weight loss over four years, for each serving. As you can see, eating berries was most strongly associated with weight loss. 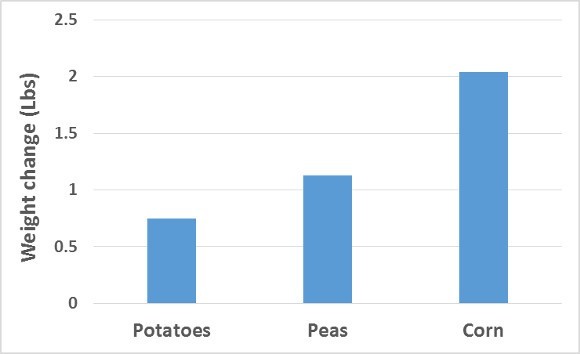 As you can see, potatoes, corn and peas were all associated with weight gain in the current study.

However, this only applied to servings that exceeded one serving per day.

Overall, these results indicate that eating fruits and (most) vegetables may help with weight loss and weight maintenance.

On the other hand, starchy vegetables, such as potatoes, peas and corn, may promote weight gain when eaten in excess.

When fruits were examined, no association with weight change was found for fiber content or glycemic load.

Additionally, eating more than one serving of low-GL vegetables per day was linked to weight loss, but the significance was only marginal.

The results changed when high-fiber and low-GL vegetables were grouped together and compared with low-fiber, high-GL vegetables.

The difference was highly significant. High-fiber and low-GL vegetables were clearly better at promoting weight loss.

They only provide hints, indicating a possible causal relationship, but cannot prove anything.

Even though the study showed strong associations, their cause remains unclear.

Additionally, the interpretation of observational studies is often difficult due to a type of bias known as confounding.

This means that factors, other than those that are being investigated, may be responsible for the observed relationship.

These factors are called confounders. In this study, the most important confounders — physical activity, smoking, and foods — were taken into account.

There are several other potential limitations.

That being said, this study appears to be about as good as observational studies get.

Supporting the current study, other observational studies have found that increased fruit and vegetable intake is linked to weight loss.

One observational study found a similar association that only applied to fruit, but not vegetables.

In contrast, another observational study did not detect any significant association of fruit and vegetable intake and weight change. However, it did not do a change-on-change analysis like the current study.

Conversely, increasing vegetable and fruit intake did not have any significant effects on weight in 690 healthy individuals over a 6-month period.

Trials that have focused on eating specific fruits and vegetables support that some of them may benefit weight loss. Among these are apples, pears and grapefruit.

Overall, the findings of the study support the dietary recommendations of eating fruits and vegetables for healthy weight.

However, not all vegetables are made equal.

The study indicates that excessive consumption of certain starchy vegetables may promote weight gain. These include potatoes, peas and corn.

In short, if you are overweight, consider eating more whole fruit and vegetables, but limit your intake of starchy vegetables.