Gluten is a protein found in certain grains, especially wheat.

There are some people who react negatively when they eat gluten and experience adverse symptoms.

There is one well-defined disease called celiac disease, and then another more controversial condition called gluten sensitivity.

Celiac disease affects about 0.7-1% of people, but the numbers for gluten sensitivity range from 0.5-13% depending on the study.

Some experts even believe that gluten sensitivity isn’t a real condition. 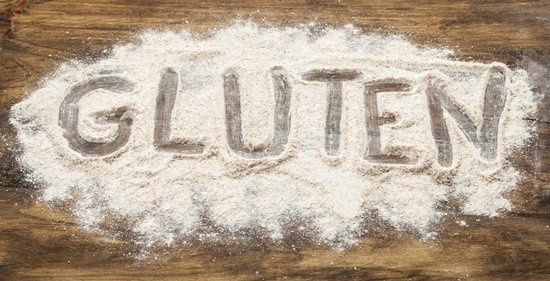 Today’s study may be able to shed some light on gluten sensitivity and the usefulness of removing gluten from the diet.

This study looked at almost 400 people who believed that they were gluten intolerant, and investigated whether these people actually benefitted from a gluten-free diet.

Gluten intolerance is a general term used for adverse reactions to gluten in wheat, rye and barley.

It can be divided into two distinct conditions; celiac disease and gluten sensitivity.

Celiac disease is an autoimmune disorder in genetically predisposed people. It is triggered by the consumption of gluten. It is a serious condition, and most people who have it don’t know about it.

The diagnosis is based on the following criteria:

Many scientists have speculated that gluten sensitivity is a misnomer – that it is caused by substances other than gluten.

Some researchers even believe that it’s all in the minds of people. No matter what kind of sickness people suffer from, it’s all blamed on wheat and gluten.

Aim of the Study

The aim of the current study was to find out how many of those with self-reported gluten intolerance actually had celiac disease, non-celiac gluten sensitivity or wheat allergy.

A total of 392 participants, both men and women, were included in the study.

They had one thing in common – they all complained of various general symptoms and believed them to be caused by gluten.

First, the researchers thoroughly tested all of the participants for celiac disease and wheat allergy.

Only 26 participants (6.6%) were positively diagnosed with celiac disease, and two (0.5%) turned out to be allergic to wheat.

This left 364 people who believed they reacted adversely to gluten, without a positive diagnosis of celiac disease or wheat allergy.

To investigate if any of the remaining participants had gluten sensitivity, they were put on a gluten-free diet for 6 months.

To increase compliance, all participants were interviewed by a nutritionist on a monthly basis.

The diagnosis criteria of gluten sensitivity were the following:

According to the study results, only 27 (7%) of the participants fulfilled these criteria, and were identified as “gluten sensitive”.

For this reason, the researchers concluded that only 14.5% of those who complained of gluten intolerance actually had issues with gluten or wheat.

On the other hand, 86% of people were wrong in their suspicions. Their symptoms were not relieved on a gluten-free diet, and their symptoms did not worsen when they started eating gluten again.

Here is an overview of the results: 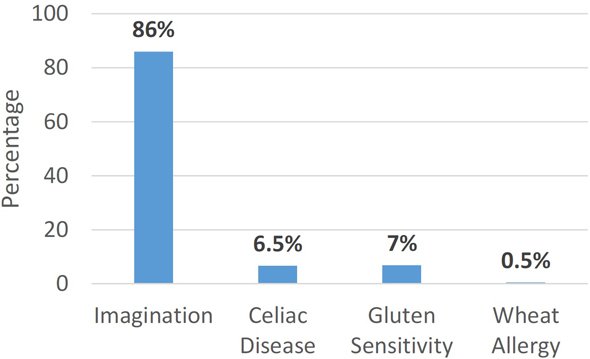 The main conclusions of this study are:

The study had several limitations.

First, there was no control group in the study. All participants were submitted to the same treatment.

It is impossible to know whether it was actually the gluten-free diet that caused improvements in symptoms among those 27 people who reported a positive change.

The improvement could simply have been due to chance. Symptoms tend to change naturally over time and are influenced by various lifestyle factors.

Second, the participants knew they were on a gluten-free diet. They also knew when they were submitted to a gluten re-challenge.

It can’t be ruled out that changes in symptoms were due to a placebo effect.

Third, self-reported symptoms are difficult to quantify, and there may be high variability in how people perceive and report symptoms.

In short, the study had several major design flaws, so the results should be taken with a grain of salt.

Randomized controlled trials are the gold standard in nutrition research.

Two of these studies have shown that people with irritable bowel syndrome (IBS – a common digestive disorder) but not celiac disease experience improvements on a gluten-free diet.

These studies support gluten sensitivity as a real condition, and indicate that a gluten-free diet can be beneficial in people who don’t have celiac disease.

However, other researchers believe that these benefits are not caused by removing gluten, but other problematic substances in wheat, mostly FODMAPs.

FODMAPs are short-chain carbohydrates that are poorly absorbed and cause digestive problems in many people.

One study fed isolated gluten to people who were not eating any FODMAPs. This study found no consistent adverse effects from gluten.

The study indicated that the benefits of gluten-free diets may be because these diets also remove wheat, which is a major source of FODMAPs.

As a result, some people claim that “wheat sensitivity” may be a more accurate term than “gluten sensitivity”. In those that do not have celiac disease, the benefits of removing wheat probably do not have anything to do with gluten.

The main message of this study review is that the great majority of people who think they are intolerant to gluten don’t actually benefit from a gluten-free diet.

The study indicates that non-celiac gluten sensitivity is about as common as celiac disease. The prevalence of celiac disease is around 0.7-1%.

However, the study has some major limitations so it cannot really provide any firm conclusions.

Given the body of evidence, non-celiac gluten sensitivity still probably exists, but it may be relatively rare.

The debate of gluten sensitivity is still up in the air, and we will review new studies as they come.

All this being said, if you consistently feel bad after eating gluten-containing cereals, you should definitely go on a gluten-free diet and see if your symptoms improve.

Even if you don’t have celiac disease, a gluten-free diet may be worth trying. In fact, there is no nutrient in wheat, barley and rye that can’t be provided by other foods.

Gluten- and wheat-free diets may have benefits for some people, but there is currently no evidence that warrants prescribing them to the general population.

In fact, the current study suggests that the majority of people would not benefit from such a diet, even people who believe that gluten causes them problems.