In many animal species, such as monkeys, eating less has been linked to longer lifespans. However, this is much harder to measure in humans, since we live longer.

Therefore, a team of scientists decided to study how reducing calorie intake affects predictors of longevity. Their results were published in Journals of Gerontology: Medical Sciences.

However, during moderate calorie restriction, weight loss gradually slows down. This is known as the starvation response, or metabolic adaptation, and is characterized by a reduced metabolic rate.

Moderately restricting calories may have many health benefits, especially if you keep it up for a long time and get enough essential nutrients.

In many animals, such as rhesus monkeys, moderate calorie restriction increases lifespan and slows down the development of many age-related diseases.

This is supported by observational studies in humans indicating that long-term calorie restriction may improve many risk factors of chronic disease.

Randomized, controlled trials have also shown that when overweight people follow a reduced-calorie diet for 6–12 months, many risk factors are improved.

A team of researchers examined the effects of moderate calorie restriction on predictors of longevity in normal-weight adults.

A 2-Year Randomized Controlled Trial of Human Caloric Restriction: Feasibility and Effects on Predictors of Health Span and Longevity.

This randomized, controlled trial studied the feasibility and safety of long-term, moderate calorie restriction. It also examined its effects on predictors for longevity.

To date, this is the largest study to examine the effects of long-term calorie restriction in adults. Non-obese men and women, aged 21–51 years, participated in the study for 2 years.

At regular intervals during the study, the researchers measured several factors, including the change in resting metabolic rate, blood levels of triiodothyronine (T3) and tumor necrosis factor-α (TNF-α).

A total of 188 people completed the study, or 86% of those who started.

Bottom Line: This was a randomized, controlled trial examining the effects of sustained calorie restriction on predictors of longevity.

Metabolic rate is a measure of metabolism that estimates the amount of calories used by the body at a given time. In animals, a low resting metabolic rate (RMR) has been associated with increased life span.

In the present study, resting metabolic rate decreased significantly more in those who were on a reduced-calorie diet. 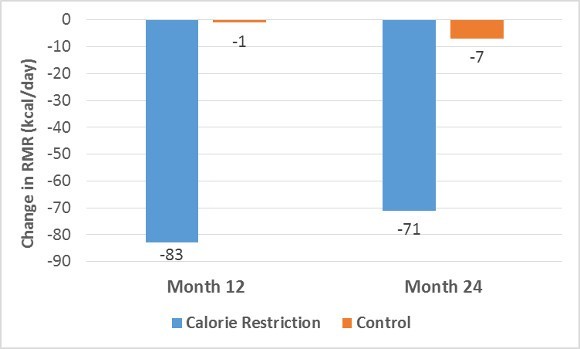 This difference in RMR across groups was mostly explained by the greater weight loss among those who were on a reduced-calorie diet.

Bottom Line: Sustained calorie reduction led to slower metabolism or a decreased resting metabolic rate (RMR). This was caused by weight loss as well as the starvation response.

Triiodothyronine (T3) is a thyroid hormone that affects metabolism, body temperature and heart rate. Low thyroid activity has been associated with longevity in animals.

The present study showed that T3 decreased by more than 20% in those who were on a reduced-calorie diet, as shown in the chart below. 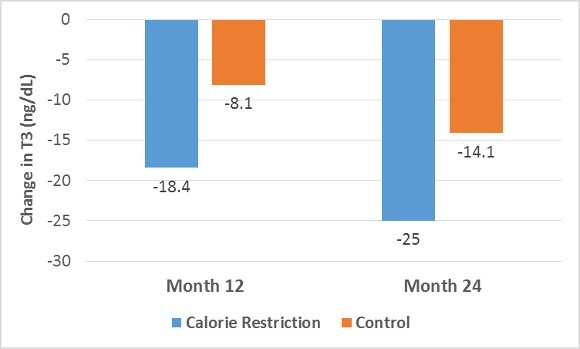 Bottom Line: Levels of the thyroid hormone triiodothyronine (T3) decreased significantly on the reduced-calorie diet. Reduced T3 has been associated with longevity in animal studies.

Tumor necrosis factor alpha (TNF-α) is an inflammatory marker. High levels of TNF-α indicate systemic inflammation, and in animal studies, low levels of TNF-α have been associated with longevity.

In the present study, levels of TNF-α decreased significantly in those who were on a reduced-calorie diet, as shown in the chart below. 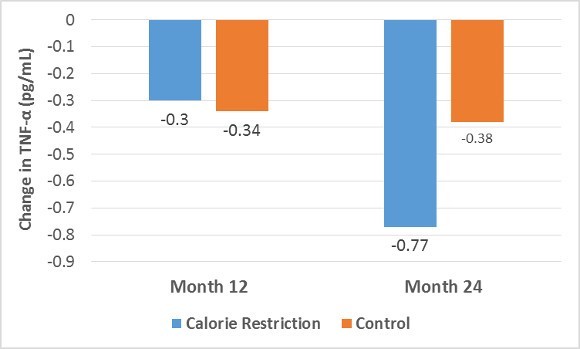 These findings are consistent with observational studies showing lower TNF-α in people who have been on a reduced-calorie diet for a long time.

These included a decrease in bone mineral density, and anemia that didn’t improve with treatment. Additionally, one participant lost too much weight.

Overall, bone mineral density was significantly reduced in the calorie-restricted group, compared to the control group. However, these decreases were small.

This suggests that sustained calorie restriction may, over many years or decades, lead to osteoporosis and fractures.

However, it is unclear whether this is caused by calorie restriction itself or an insufficient intake of certain nutrients.

Bottom Line: Moderate calorie restriction is generally safe for most healthy people, as long as the intake of essential nutrients is sufficient. However, this may depend on the individual.

This study appears to have been designed and implemented well, with no apparent limitations.

During the study, however, the calorie-restricted group only lost 10% of their initial body weight, not the expected 15.5%.

This is because the participants did not achieve the planned 25% calorie restriction, but only about 12%. Why this happened is unclear, but it might have been due to lack of compliance and/or an inaccurate study design.

Also, the study’s findings are limited to highly motivated, healthy, non-obese individuals. Sustained calorie restriction may have different effects in other groups.

Bottom Line: The study was planned and implemented well. However, participants did not achieve the planned 25% calorie restriction.

In short, the study showed that moderate, long-term calorie restriction is both feasible and safe for healthy, non-obese people.

Although the effects on life span couldn’t be measured directly, a reduced-calorie diet improved several health aspects related to longevity.

Simply put, moderately reducing calories may have many potential benefits, as long as the intake of essential nutrients is adequate.

In some cases, however, reducing calories can be downright harmful. If you are not overweight, consult with your doctor before going on a reduced-calorie diet.